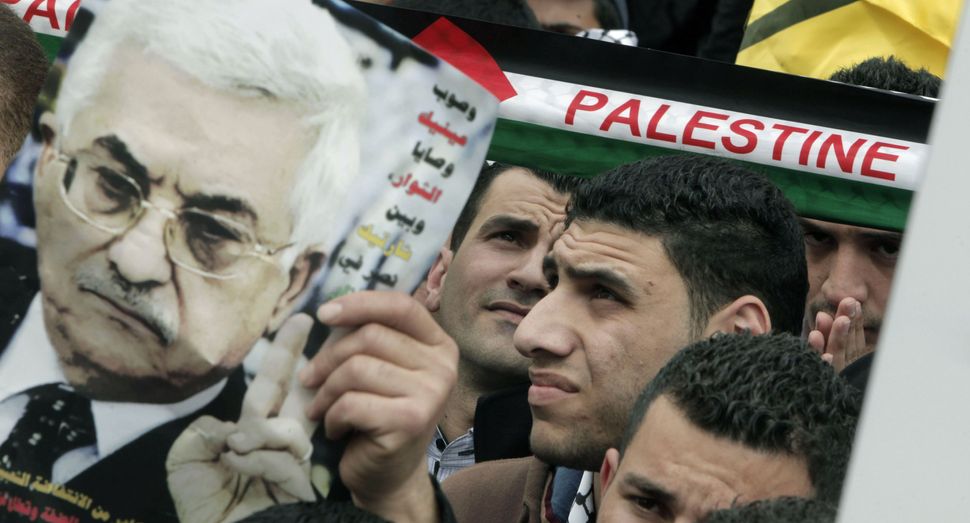 Thousands of Palestinians took to the streets on Monday to show their support for President Mahmoud Abbas, who is under heavy pressure as he prepares to meet U.S. President Barack Obama.

Abbas, scheduled to see Obama later in the day in Washington, complained last week that he had come under great duress during U.S.-brokered peace talks with the Israelis, which are due to expire next month in the absence of any accord.

Adding to his diplomatic concerns, Abbas has also got entangled in a fierce slanging match with an exiled rival, Mohammed Dahlan, who lambasted his ally-turned-foe in a two-hour interview with Egyptian television on Sunday.

The interview sent shockwaves through the Palestinian Territories, which is not used to seeing such political acrimony played out on their televisions screens, and Abbas’s supporters rallied in a number of towns across the occupied West Bank.

“We support you, we are with you,” demonstrators chanted. “Our choice is our leadership, the protector of our national project.”

Some burnt pictures of Dahlan, a former senior official in Abbas’s Fatah movement, who was forced into exile in 2011 following accusations of corruption that he has denied.

The primary focus of Monday’s protests were efforts by the United States to secure a framework deal between the Israelis and Palestinians that will extend negotiations beyond the initial end-of-April deadline.

The talks are aimed at creating an independent Palestinian state and end decades of conflict, but despite almost nine months of meetings, there has been no sign of progress.

Abbas has said he will not agree to demands being made by the Israelis, including that he should recognise Israel as a Jewish state. “I am 79 years old and am not ready to end my life with treason,” he said last week.

“These rallies send clear messages that the Palestinian people are committed to their constant rights and will never concede them,” said Fatah Central Committee member Mahmoud Al-Aloul during the rally in Ramallah.

But Dahlan, who is seen as a potential successor to Abbas, scoffed at the idea that the Palestinian president would remain faithful to his uncompromising rhetoric.

“(Abbas) we all know that you are going there (to Washington) only to extend the negotiations,” Dahlan told Egyptian television.

Witnesses said supporters of Dahlan and Abbas came to blows during a protest in the Gaza Strip, prompting the intervention of security forces in the small coastal enclave controlled by the Islamist group Hamas.