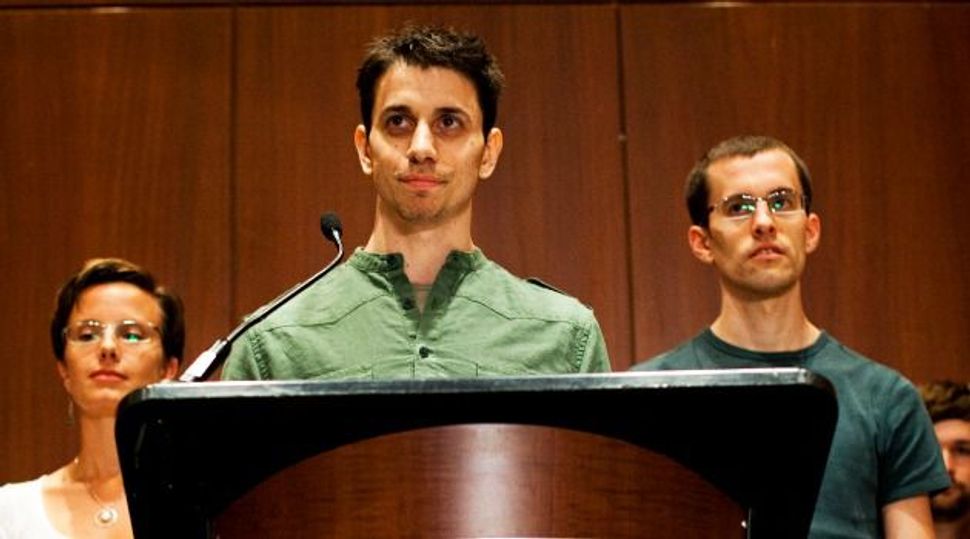 Josh Fattal, an American hiker freed by Iran in September 2011 after two years in captivity, said the Iranians knew he was Jewish even though it was never explicitly stated.

“I was so scared in those first months about being a Jew with an Israeli father, but at a certain point I embraced it,” Fattal told the Philadelphia Jewish Exponent. “They know already. If they are going to do something to me for my heritage, then they will — but I am not going to change myself. I am not going to hide who I am.”

Fattal’s father, Jacob, emigrated from Iraq to Israel in 1951, and after serving in the Israeli army moved to the United States. Jacob Fattal’s siblings still live in Israel.

JTA had refrained from reporting on his capture until his release for fear of connecting him to something Jewish during his captivity in Iran.

Fattal is now a doctoral candidate in history at New York University and has a 7-month-old son.

He and his friend Shane Bauer, as well as Bauer’s girlfriend, Sarah Shourd, were arrested in 2009 as they were hiking near the unmarked border between Iran and Iraq. Iran said they crossed into Iranian territory.

The three were held and not allowed contact with the outside world, and were denied access to a lawyer. They were not charged officially for months, then were convicted of spying following a show trial. Shourd was released a year before the two men.

Fattal told the Jewish Exponent that in the early days of his captivity, he thought often about Daniel Pearl, the Jewish Wall Street Journal reporter killed by Islamic extremists in Pakistan in 2002.

Fattal’s Iranian interrogators learned the truth of Judaism within a few weeks, but he said he was never treated differently than Bauer and Shourd, neither of whom is Jewish.

He said he tried to observe some Jewish traditions while in solitary confinement for 100 days, but returned to his secular lifestyle once he was reunited in a cell with Bauer.