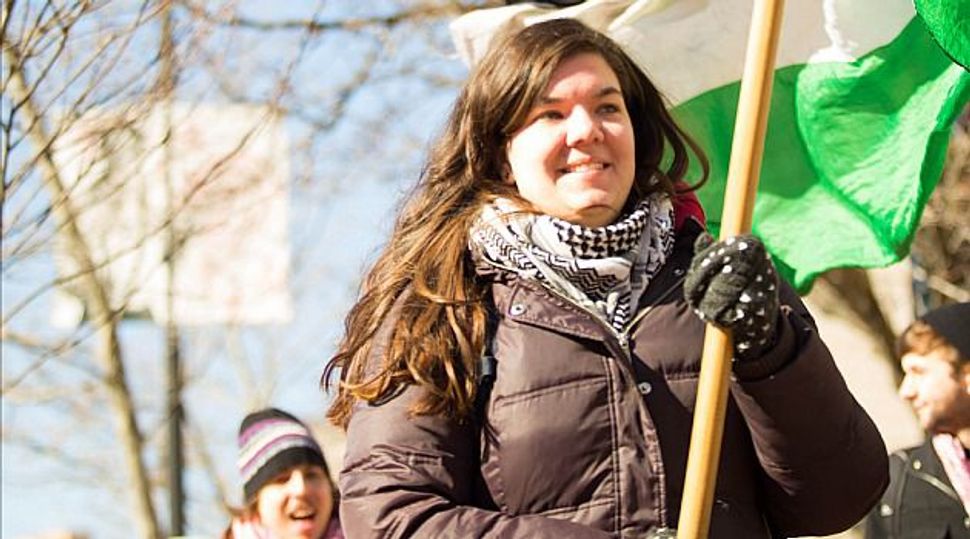 More than 200 protesters rallied at Northeastern University opposing the school’s recent suspension of the campus chapter of Students for Justice in Palestine.

The protest was organized by a coalition of more than 29 organizations including Jewish Voice for Peace Boston and many of its local student chapters as well as feminist, peace and social justice organizations.

The group of young adults and middle-aged activists from a few labor groups as well as members of Veterans for Peace marched to the office of Northeastern University President Joseph Aoun to deliver a petition with some 7,000 signatures in support of the group.

The protesters called on the university to reinstate Students for Justice in Palestine as a student organization and drop all disciplinary actions against two students.

The student chapter of SJP was suspended from campus on March 7 for at least a year, and its current executive board members are barred from serving on future boards in the organization after the group distributed a leaflet in student residences. The so-called mock eviction notice is designed to mimic those that appear on illegal Arab construction slated for demolition. Similar campaigns have been used in other campuses.

The notice, which states that it is not a real eviction notice, has the headline “Dorm scheduled for demolition in three days.” It states, “Eviction notices are routinely given to Palestinian families living under oppressive Israeli occupation,” and goes on to make other inflammatory claims about Israeli treatment of Palestinians.

“We condemn the university’s strong-arm tactics as blatant violations of free speech and dangerous attempts to suppress academic debate on campus,” said Lisa Stampnitzky, in a statement released by Jewish Voice for Peace. “These administrative actions are discriminatory: SJP has been treated more harshly than other groups who have enacted similar protests,” she said.

The timing of the demonstration coincided with a university hearing for two students who face disciplinary charges for their participation in the leafleting. The two students are women of color, according to Liza Behrendt, of Jewish Voice for Peace Boston while none of the white students have been charged with any infractions, she says.

Northeastern University released a March 18 statement, saying that it is a “community of educators and learners that is strengthened by its diversity. The University is committed to a free and open exchange of ideas with an atmosphere of civility and mutual respect.”

The statement goes on to say that “the undergraduate Students for Justice in Palestine organization at Northeastern has been temporarily suspended for multiple violations … over an extended period of time,” and that the decision was handed down after a thorough review of the facts and “only after repeated efforts by university officials to guide the leadership of the undergraduate group.”

It further states that the disciplinary hearing for the two students relates to violations of residence hall rules and not freedom of expression.

“The students are not facing suspensions or expulsion, for any reason,” the statement says.

“Censorship on university campuses is distressing,” said Sarah Wunsch, a staff attorney for the Massachusetts chapter of the American Civil Liberties Union (ACLU), who spoke at the rally. The ACLU and two other law groups have been advising the Northeastern U chapter of Students for Justice in Palestine since last year when it was placed on probation after members of the group staged a walkout at a presentation by Israeli soldiers.

“Flyers are handed out at Northeastern all the time without advanced permission,” Wunsch told JTA. “We think the university is engaging in viewpoint discrimination and content discrimination.”

Following the suspension of Students for Justice in Palestine, the pro-Israel group StandWithUs, issued a statement welcoming Northeastern University’s action in upholding standards of civility and inclusiveness.

“We realize that the Arab-Israeli conflict is a contentious issue,” said StandWithUs CEO Roz Rothstein. “But on too many campuses, anti-Israel activists have increasingly crossed red lines: they deny free speech to Israel’s supporters, spread lies about Israel, spew bigotry and anti-Semitism and bully pro-Israel students. We applaud NEU for upholding a responsible environment.”