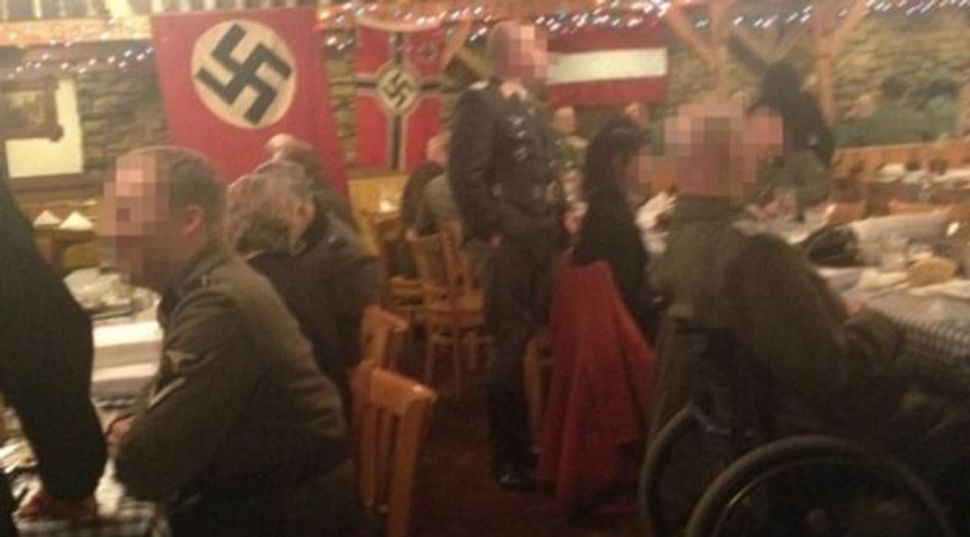 A Minneapolis man who organized a World War II party with actors dressed in SS uniforms at a restaurant draped in Nazi flags issued a public apology.

Scott Steben issued the apology on Wednesday on behalf of a World War II reenactment group. Photos of the Jan. 20 event at a German restaurant in northeast Minneapolis went viral earlier this week, causing a backlash against the restaurant, Gasthof zur Gemutlichkeit, and its owner.

“On behalf of everyone who participated in a World War II reenactment dinner last January, I apologize,” read a statement issued by Steben and published in the Minneapolis Star Tribune. “We understand that some of the items we displayed at the dinner have made people feel uncomfortable. That was not our intent.”

Steben said his group is “a historical reenactment and professional actor society” that is “dedicated to promoting understanding of World War II.”

“In no way are we or any of our members affiliated with groups that promote the subjugation of anyone. All our members value education, equal rights and the complex relationship between good versus evil,” the statement said.

Steben, who has played a German soldier in two films, said the group is reviewing its practices, “so that in the future our members will be more mindful of the unintended effects of the materials we display.”

The photos of the event that made the rounds on the Internet were taken and distributed by a restaurant staff member who was fired last week, according to the Star Tribune.

The party has been held annually at the restaurant for the last six years.