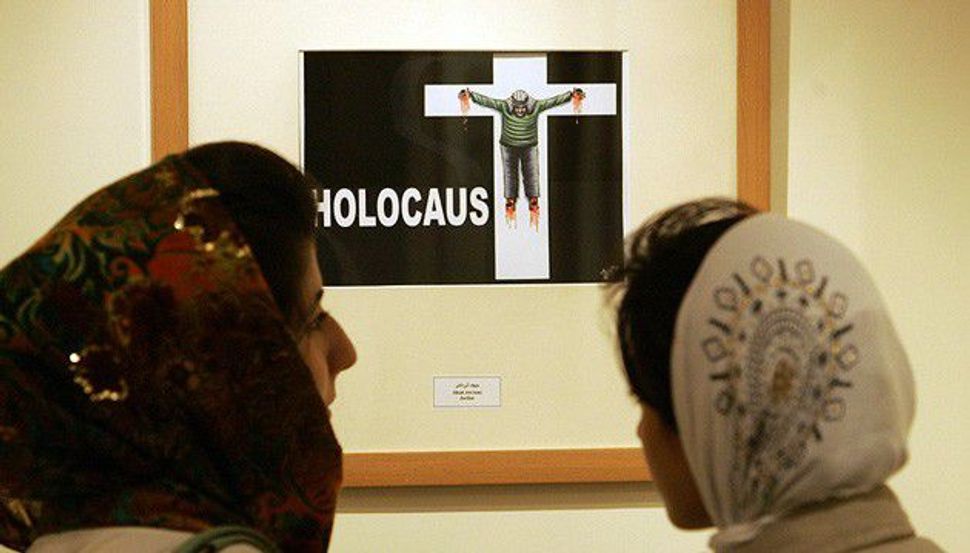 A cartoon of an Arab man crucified on a cross marked ?Holocaust? is displayed in a 2006 Holocaust cartoon exhibition in Tehran. Image by Getty Images

“Once again, the injection of Holocaust denial by an Iranian leader shows the world how such deep-seated hatred exists at the helm in Iran,” Abraham Foxman, the Anti-Defamation League’s national director, said in a statement.

“We have seen the Ayatollah spew his vehement animosity toward Jews before on other national occasions in Iran and these statements once again show the bigotry and hypocrisy of this regime,” Foxman said.

Also condemning the remarks were the Conference of Presidents of Major American Jewish Organizations and the World Jewish Congress.

Rouhani has since qualified his remarks under pressure from hardliners in the Iranian regime, reflecting an Iranian policy — often expressed by Khameini himself — of questioning whether the Holocaust occurred or if it is exaggerated.

Khameini, like some other Iranian leaders, does not acknowledge or deny the veracity of social media accounts bearing his name, but the comment appeared to reflect the content of a speech he gave Friday for Nowruz, the Iranian New Year, which media reports said included an attack on some western nations for criminalizing Holocaust denial while criticizing Iran for controlling speech.

“Absolute #freedom doesn’t exist anywhere in world. Even countries that claim 2 have freedom, set redlines on which they’re utterly strict,” the Twitter account in his name said. “Does anybody dare talk about #Holocaust in Europe? #freedom”