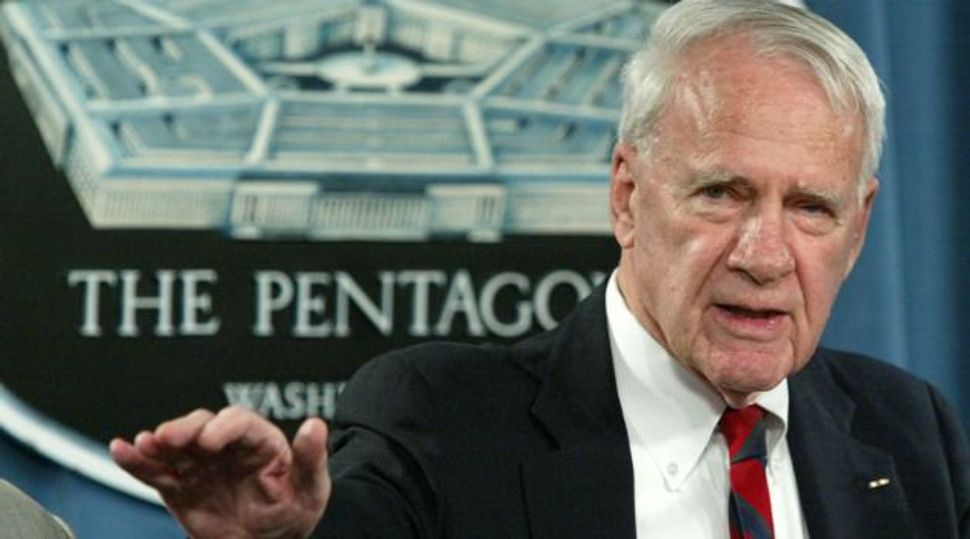 James Schlesinger, who served three U.S. presidents, Republican and Democrat alike, in the top posts at the Central Intelligence Agency, Pentagon and Energy Department in the 1970s, died on Thursday at age 85.

A serious thinker on national security and an executive determined to get things done, Schlesinger headed the CIA and the Defense Department under Republicans at a time of major change and then, as its first chief, established the Energy Department from scratch under Democrat Jimmy Carter.

He died at a hospital in Baltimore, and the cause of death was complications from pneumonia, a U.S. official said.

As defense secretary under Republican Presidents Richard Nixon and Gerald Ford from 1973 to 1975, Schlesinger led a buildup in defense to assure the U.S. military’s Cold War balance with the Soviet Union and make it “increasingly competitive with potential adversaries.”

His bluntness, which some said bordered on arrogance, made him some enemies. Over time his disagreements with Secretary of State Henry Kissinger and disputes with some members of Congress led Ford, who was concerned about rising defense budgets, to dismiss him.

During his tenure, there were three major military events around the world. The Yom Kippur War was fought in the Middle East in 1973, Turkey invaded Cyprus in 1974 and North Vietnam took over the South in 1975.

In the Yom Kippur War, Schlesinger resupplied the Israelis when the war was not going well for them despite complaints from Kissinger that the action would anger the Arabs.

The U.S. military presence in Vietnam had been rolled back before Schlesinger became secretary. Although he once suggested that U.S. aerial bombing should resume if North Vietnam advanced toward the South, when it did so, there was little the United States could do.

On April 29, 1975, Schlesinger announced that the last U.S. personnel had left Vietnam, ending one of the most divisive periods in U.S. history.

U.S. Defense Secretary Chuck Hagel said Schlesinger “leaves behind a remarkable legacy of accomplishment and service that will ensure his place in history alongside our country’s great statesmen.”

“I relied on his counsel when I was a United States senator and as secretary of defense have benefited enormously from his experience, his guidance, and his strategic thinking as a member of the Defense Policy Board,” Hagel said in a statement.

Former U.S. Senator Joe Lieberman of Connecticut, the 2000 Democratic vice presidential nominee, added: “Jim Schlesinger was a good and gifted man and an extraordinary patriot and public servant. Over the years, I benefited greatly from his informed judgment and wise counsel.”

Born Feb. 29, 1929 in New York City, Schlesinger went to Harvard University, earning a Ph.D. in economics in 1956. He taught at the University of Virginia, published items on national security and worked for RAND Corp as director of strategic studies.

After serving as deputy budget director and chairman of the Atomic Energy Committee, he became director of the Central Intelligence Agency in February 1973 under Nixon.

His six-month tenure was rocky. He succeeded Richard Helms, a respected and popular director who was fired because he would not go along with Nixon’s actions in the Watergate scandal.

Schlesinger launched a drive for major organizational and personnel overhaul, which put him at odds with many at the agency. Word had it that he was so unpopular that a security camera had to be installed across from his official portrait for fear it would be vandalized.

Nixon moved him to the Defense Department at the relatively young age of 44. When he left nearly 2-1/2 years later, he was replaced by the youngest defense secretary ever, Donald Rumsfeld.

Carter became president in 1977 after a campaign in which he stressed fixing America’s energy problems, and he picked Schlesinger as his special adviser on the issue.

Later in that year when Congress established the Energy Department, Carter named him as its first secretary.

Schlesinger left that post in 1979 and returned to lecturing and writing and served on a number of boards and commissions, including being named to the Homeland Security Advisory Council after the Sept. 11, 2001, attacks.

He returned to public service in 2008 and the chance to serve a fourth president, Republican George W. Bush, when he was picked to lead a panel looking at ways to improve control over the U.S. nuclear arsenal.