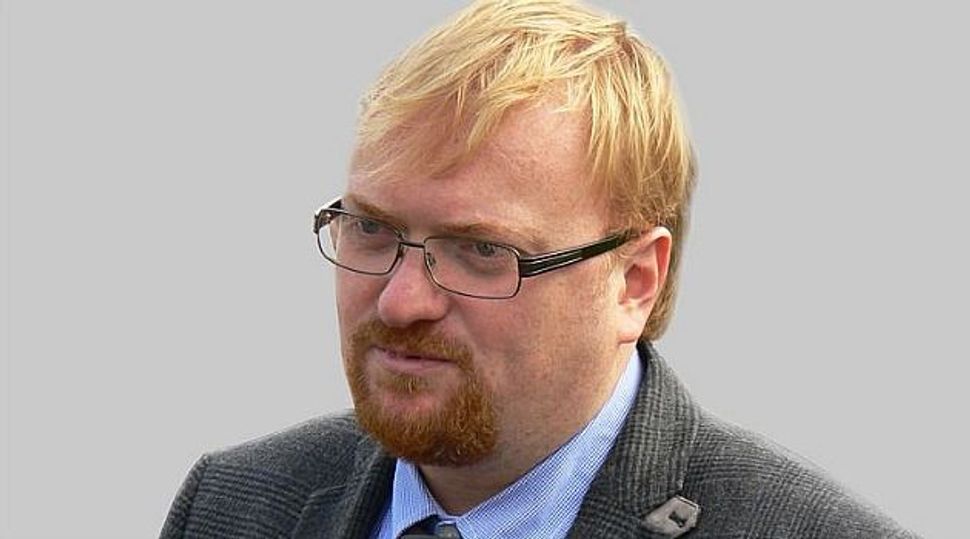 Vitaly Milonov made the statements last month during a meeting of St. Petersburg’s city council, where he serves as a lawmaker for President Vladimir Putin’s United Russia party, the svodka.net news website reported earlier this week.

“They vilify any saint, it is in their tradition of 2,000 years, beginning with the appeals to crucify the Savior, ending with accusations of anti-Semitism against St. John of Kronstadt,” Milonov said during a March 19 speech in front of the city’s legislative council, according to the report.

In his speech, Milonov was advocating a bill which proposes to declare June 14 a municipal holiday in honor of John of Kronstadt, a 19th century leader of the Orthodox Russian Church. His legacy remains controversial because of his membership in the Black Hundred ultra-nationalist and declaredly anti-Semitic movement, which supported pogroms against Jews.

But Milonov said such criticism was based on “complete lies, a modern neo-liberal fable with a sulfuric, deep history of Satanism.”

Both the Chabad-affiliated Federation of Jewish Communities of Russia and the Russian Jewish Congress condemned Milonov’s remarks.

“In his words, the Russian Jewish community sees a common set of anti-Semitic stereotypes, starting with the traditional accusations of the crucifixion of Christ and ending with a veiled reference to modern Russian Jewry as ‘neo-liberal’ politicians,” the federation wrote in a statement published on its website.

Occurring on the heels of an anti-Semitic remark made on Russian state television, in which a television anchorwoman asserted that the Jews brought the Holocaust on themselves, the affair comes at a sensitive time for Putin’s administration, which has cited perceived anti-Semitism among Ukrainian revolutionaries as a justification for Russia’s invasion and annexation of the Crimean Peninsula last month.

Ukraine saw a spate of anti-Semitic attacks since the eruption of revolution in November against the government of former president Vicktor Yanukovych over his perceived pro-Russian policies. He was ousted from power in February by a provisional government ahead of an election slated for May.

On March 25, Ukraine’s foreign ministry mirrored Russian allegations in a statement that said that Ukraine is worried about “increasing manifestations of fascism, xenophobia and anti-Semitism in Russia.”

The Ukrainian Ministry spokesperson Yevhen Perebiynis told the Ukrainian Pravda newspaper that these concerns were based on a “marked increase in the number of anti-Semitic incidents in Russia.”

Leaders of Russian and Ukrainian Jewish communities exchanged similar allegations. In January, the Russian Jewish Congress said in its report that it had documented 10 acts of vandalism in 2013 compared to eight in 2012.

In both countries, anti-Semitic incidents are rare compared to the annual French and British annual averages of several hundred incidents.