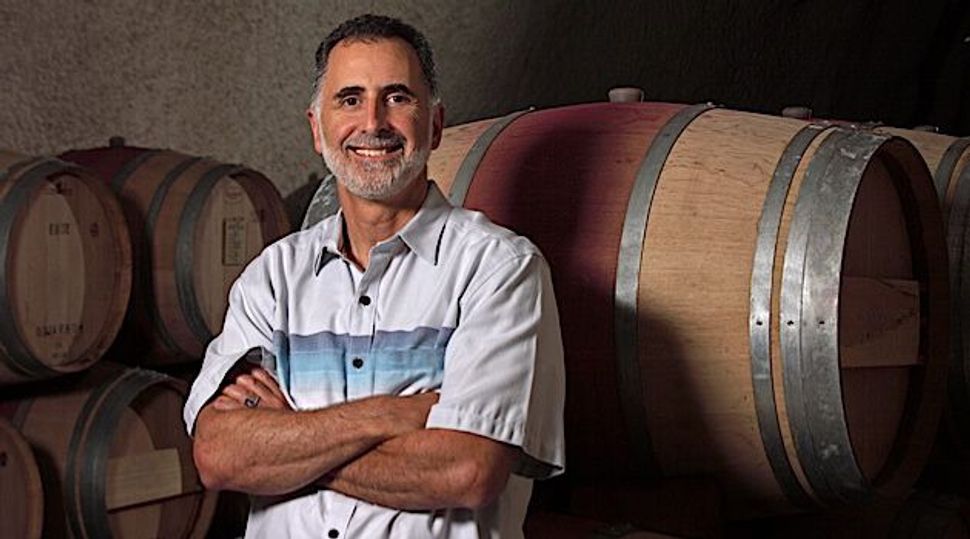 Jeff Morgan’s story is one best told over a glass of wine — preferably a robust cabernet by Covenant, the kosher wine company he has co-owned for more than a decade. A roving jazz musician and writer turned vintner, Morgan has spent most of the past 10 years working with California vineyards and wineries to produce some of the top kosher cabernet sauvignons, chardonnays and sauvignon blancs on the market. This year, the longtime wine nomad is settling into new digs: his first permanent winery in Berkeley.

For years, Morgan rented out production space at other wineries, knowing that he ultimately wanted a space of his own. “We looked around and just could not find anything in Napa that made sense financially,” he said. It turned out to be a fortunate problem to have.

Last year, his wife and business partner, Jodie, suggested a different idea: moving Covenant’s operations south, to the Bay Area. The company’s associate winemaker was already commuting to the winery every day from Oakland (“a real schlep,” Morgan said). More to the point, the Morgans craved a vibrant Jewish life that Napa could not provide.

While driving through downtown Berkeley last fall, they spotted a 7,000-square-foot metal warehouse marked with a “For Sale” sign. They stopped the car. Within minutes, Morgan was envisioning how he might outfit the space with wine tanks and barrels — then he noticed a large empty plot of land next door.

On closer inspection, he found a poster attached to the fence. It announced the plot as the new home of Urban Adamah — a Jewish educational farm that launched in Berkeley in 2010. “A kosher winery right across the street from a Jewish organic cultural center!” Morgan recalled, excitedly. “We could do events together and give them our organic grape skins and seeds to compost. It would be one happy family.”

Covenant’s winery, which will enable the company to increase annual production over the next five years to 10,000 cases from 5,000, is scheduled to be up and running in time for the 2014 fall grape harvest. Most of this space will be devoted to wine making, with a small section reserved for a tasting room, offices and a dairy kitchen. “You can’t have wine without cheese,” Morgan said. The Morgans, meanwhile, put their Victorian farmhouse in Napa on the market (“We love it, but it happens to not be in Berkeley,” Morgan joked) and are relocating to the East Bay.

They also recently joined a local Modern Orthodox congregation — their first-ever synagogue membership. “We attended services on Purim, and the guy reading Megillah was wearing a Superman costume. I knew it was the right place,” he said. Later, he discovered that the contractor he hired to construct the winery also built the synagogue and is a member there.

If the story of Covenant’s winery contains a whiff of divine coincidence, it is not the first time. From Morgan’s point of view, his personal and professional paths, which have been more wandering than most, have led to this moment. “I no longer believe anything is random,” he said.

Today, Morgan, 60, is pure California, with his jeans–and-a-button-down style, cropped salt-and-pepper beard and easygoing wit. But he started life on the East Coast, growing up in Manhattan and attending college in Connecticut. He spent several years as a professional saxophonist — a gig that brought him to Europe, where he led a jazz band in Monte Carlo in his 20s. While there, he developed a deep passion for drinking wine and making it. Ultimately that passion brought him back to New York to try his hand apprenticing at vineyards on Long Island. Within a few years, he began writing about wine for magazines and newspapers.

In the early 1990s he received an unexpected assignment: Wine Spectator magazine asked him to write a kosher wine roundup for Passover. He got the job because of his Jewish heritage — despite knowing next to nothing about Judaism. He started to sample bottles and speak to collectors to familiarize himself with the world of kosher wine, and found a rather disappointing selection of saccharine sacramental options, buoyed by a few promising standouts.

He wrote the column for the next eight years, and eventually relocated with his family to Napa to accept a position as Wine Spectator’s West Coast editor. His long-cultivated “wine dream,” to produce spectacular wines of his own, moved with him. That dream birthed Covenant, which Morgan co-founded with fellow winemaker Leslie Rudd in 2003. They name their company Covenant to symbolize a connection to history and heritage that Morgan hoped to convey through his wines.

Deeply familiar with the high-end nonkosher wine market, he was unwilling to compromise his taste for religion, pioneering a new method for making mevushal, boiled, wines. Morgan has long been wary of this added kosher stringency — a practice he thought had ruinous effects on a wine’s quality. Recently he started using a technique called flash-détente, which briefly heats the grapes instead of the wine. “We are the only winery that does that,” he said. “It satisfies the kosher requirement, but since grapes do not mind being heated the way wine does, the end product does not taste like mevushal.”

Perhaps most significantly for Morgan, the Wine Spectator assignment led him down a path of deeper personal spirituality. He has transformed from someone who struggled to recite the blessing over wine on Friday night, to one of the leaders of the kosher wine industry. Over the past several years, he taught himself Hebrew and started keeping a kosher kitchen. And in 2007 he celebrated his belated bar mitzvah reading the story of Noah, who was the first winemaker in the Torah. “Our involvement with kosher wine has ultimately connected us deeply to our Jewish roots,” he said. And thanks to Morgan and his wife’s relocation to Berkeley, it is connecting them to community, as well.

The Best Wines To Serve at Seder This Year