Yair Lapid Backs Curbs on Settlements To Save Peace 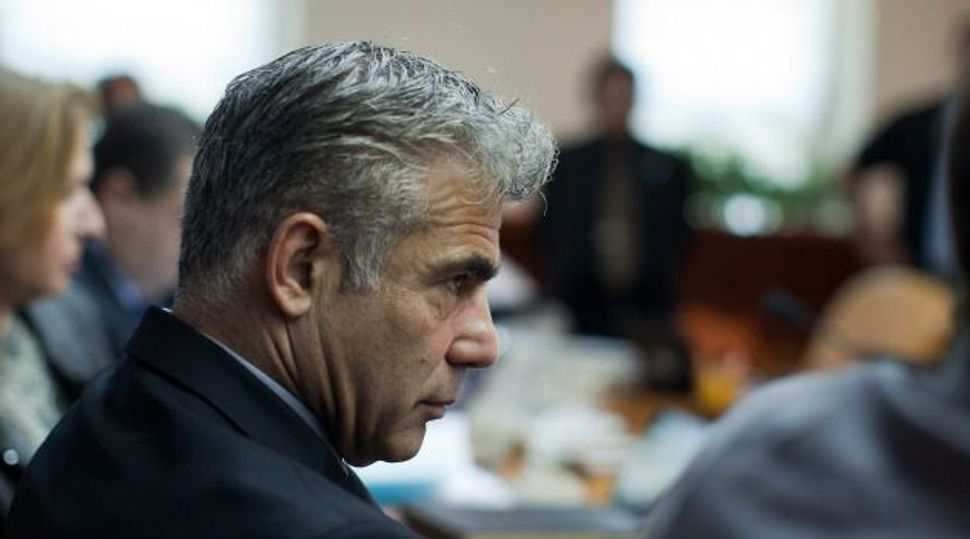 In an interview this week with JTA, his first with an American Jewish news organization since entering the Knesset last year, Lapid continued his recent shift toward placing the peace process at the top of his party’s agenda.

A year ago he told The New York Times that Israel should not change its settlement policy to advance negotiations, nor should it curb its “natural expansion” or limit financial inducements to Israelis who move there.

But on Monday, Lapid told JTA that he would sooner agree to freeze settlement growth than free Palestinian prisoners, as Netanyahu has done previously in an effort to advance the process. A fourth round of prisoner releases was due to take place March 29, but Israel reneged.

“I would choose, every day of the week, freezing the settlements over freeing prisoners,” he said. “But in this coalition, in this particular moment, this was the favorable option.”

A former television news anchor, Lapid entered politics for the first time in advance of the January 2013 elections with the aim of re-energizing Israel’s political center. He stayed relatively quiet on security issues during the campaign, running on a largely domestic platform of lowering the cost of living and expanding the mandatory military draft to include the haredi Orthodox.

But over the past year, Lapid has become increasingly vocal about the need for Israel to reach a two-state solution to its conflict with the Palestinians. And while he laid the blame for the current impasse in peace talks squarely at the feet of the Palestinian leadership, Lapid said he could not stay in the government if it did not aggressively pursue a deal.

“If I would think this coalition did not exhaust all options and it is our fault that the negotiation is not in progress or process, then I can’t stay in this government,” Lapid said. “We decided we’ll do everything in our power to back up the negotiations.”

Lapid said that overall, he is happy with how the past year has gone for his party. He dismissed criticism that Yesh Atid’s signature achievement, a bill mandating that the haredi Orthodox perform military service, is too weak. The bill defers criminal sanctions for haredi draft dodgers for three years, but Lapid said a stricter law would have been unrealistic.

“If we would just send draft bills to any young 18-year-old haredim, we’ll be the winners of some game, but nothing would have happened,” Lapid said. “The way we’ve been doing this, it will actually happen.”

Lapid also campaigned on establishing civil unions in Israel, a measure that would have broken the Orthodox Chief Rabbinate’s control of Jewish marriage. Yesh Atid introduced a bill to create civil unions in October, but it is opposed by Jewish Home, a religious Zionist party that entered the coalition in alliance with Yesh Atid.

Lapid sounded confident that he could get a civil unions bill past Jewish Home, possibly with support from left-wing parties. But though he vowed to continue to push the issue, he would not say if Yesh Atid would leave the coalition of the bill fails.

“I don’t think this is good partnership,” Lapid said, “to keep a coalition under threat.”

Lapid said all Jewish denominations should have equal standing in Israel, which he said would strengthen Israel’s relationship with American Jews. He also called for ending the Chief Rabbinate’s monopoly over Jewish marriage and conversion, and for an end to all forms of religious coercion.

But he stopped short of calling for the abolition of the Chief Rabbinate or for a complete separation of religion and state, which he said would hurt the country’s Jewish character.

“I don’t think the American model of total separation of religion and state is feasible in Israel because it was established as a Jewish state,”Lapid said. “I don’t want to give up this identity.

Yesh Atid surprised pundits when it captured 19 seats in Knesset elections last year, becoming Israel’s second largest political party. Soon after, Lapid said that he expected to be prime minister after the next ballot.

On Monday, Lapid said his party was in the Knesset to stay, but he declined to make similar boasts about his own political future.

“I’ll tell you one thing I’ve learned in this last year: There’s no problem in politics being an idiot – there’s a big problem being an idiot twice,” he said. “I’ve learned my lesson and I’m not going to declare such declarations anymore because this is stupid.”

Yair Lapid Backs Curbs on Settlements To Save Peace