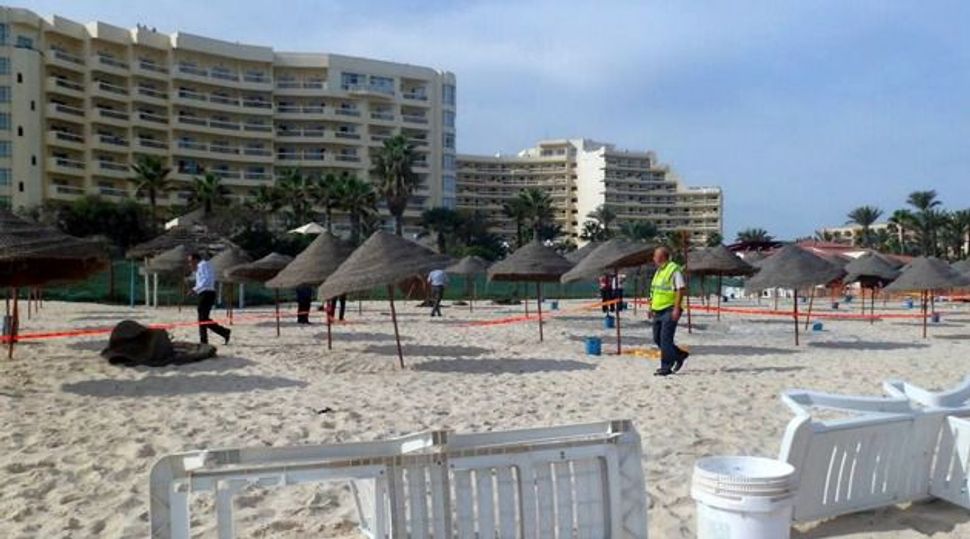 Restive: Police patrol a beachfront hotel in Djerba after 2013 bomb attempt. A stabbing has rocked the tourist island just weeks ahead of an annual Jewish pilgrimage. Image by getty images

Police in Tunisia arrested a man they believe stabbed a local middle-aged Jew on the island of Djerba.

The suspected aggressor, 38-year-old Lasaad Tounsi, is believed to have caused minor injuries to Morris Bachiri, a Jewish merchant from El Hara El Kabira, on Monday by assaulting him with a sharp object, the French-language news website African Manager reported Tuesday.

The Tunisian Interior Ministry reported the incident on its official Facebook page in a short statement that did not identify Bachiri as Jewish and said the incident was “a simple assault, nothing more and nothing less.” The statement did not offer further information except to say that Bachiri was released from a hospital shortly after the assault.

The incident occurred a month before the annual Jewish pilgrimage to the Synagogue of Ghriba, or El Ghriba synagogue, on the island of Djerba. Every year, Jews from around the world convene there for the Hilula of Ghriba – a feast which features a festive procession on or near Lag B’Omer.

The procession traditionally ends at the El Ghriba synagogue, a 19th century building which is sometimes referred to as the oldest existing synagogue in Africa, according to Georgetown University’s Berkley Center.

Last month, the Tunisian government allocated $6,300 toward renovating the synagogue. Critics, including the human rights lawyer Souhail Ftouh, called the renovation an attempt to control the damage caused to Tunisia’s image as a tourist destination following government authorities’ refusal on March 9 to allow a group of Israelis to disembark at a Tunisian port. The Israelis were passengers of the Norwegian Cruise Line, which scrapped Tunisia from its list of destinations to protest the refusal.

Israel recently advised its citizens not to visit Tunisia for fear of terrorist attacks, according to the Israeli daily Yedioth Acharonot.

Approximately 500 Jews participated in the annual pilgrimage to Djerba last year, the news website Djerba Salon reported – a fraction of the thousands that used to attend before 2002, when terrorists detonated a bomb outside the synagogue during the pilgrimage period. Twenty-one people died in the explosions, which several intelligence agencies attributed to al Qaida.

The Tunisia Islamist Ennahda movement became the country’s ruling party after the 2011 elections, which followed the ousting from power of former dictator Zine El Abidine Ben Ali in a revolution that triggered several other upheavals throughout the Arab-speaking world. Ennahda stepped down in January and was replaced by a temporary government to make way for the drafting of the country’s constitution ahead of new elections.