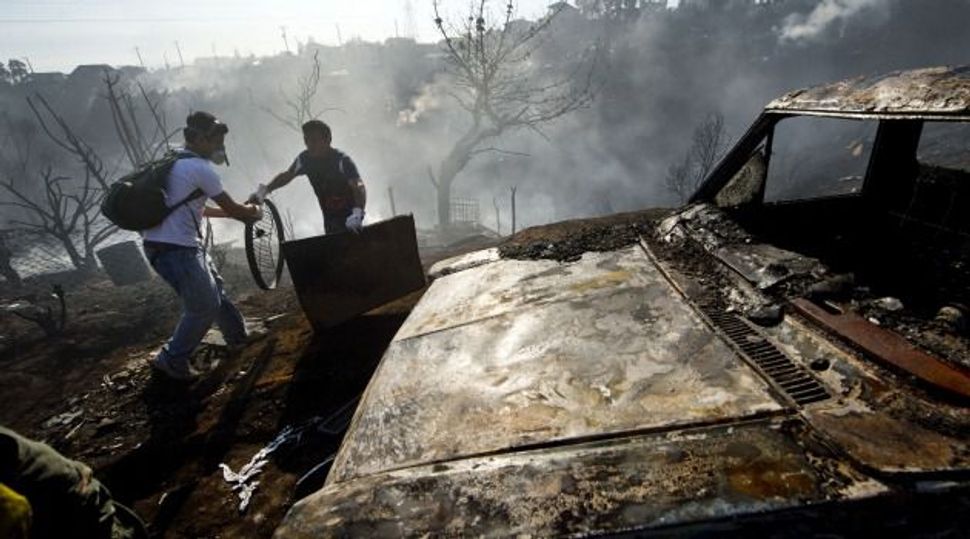 The Jewish community of Chile plans to send truckloads of supplies to victims of a huge fire raging in the central port city of Valparaiso.

The goods, including clothes, food, furniture and construction material, are currently being prepared by the community for dispatch in seven trucks to Valparaiso, the community’s president, Gerardo Gorodischer, told the Agencia Judía de Noticias.

The fires that erupted Saturday had consumed at least 2,900 homes and killed 15 people while injuring hundreds more. The flames come on the heels of a deadly earthquake that stuck Chile’s north on April 1, killing six and leading to the evacuation of hundreds of thousands.

The Jewish community opened a fundraising campaign for victims of the earthquake and has set up an aid committee for the victims of the fire, the community’s website said.

The aid to Valparaiso will leave from the capital Santiago on Thursday in a convoy. The trucks are scheduled to be offloaded at the government’s disaster management center near Valparaiso, according to the website of the Jewish community, known locally by the acronym CJCh.

Among the thousands of firemen at Valparaiso are volunteers from the “Bomba Israel – 15th Company” – a not-for profit organization of Jewish and pro-Israel fire fighters.