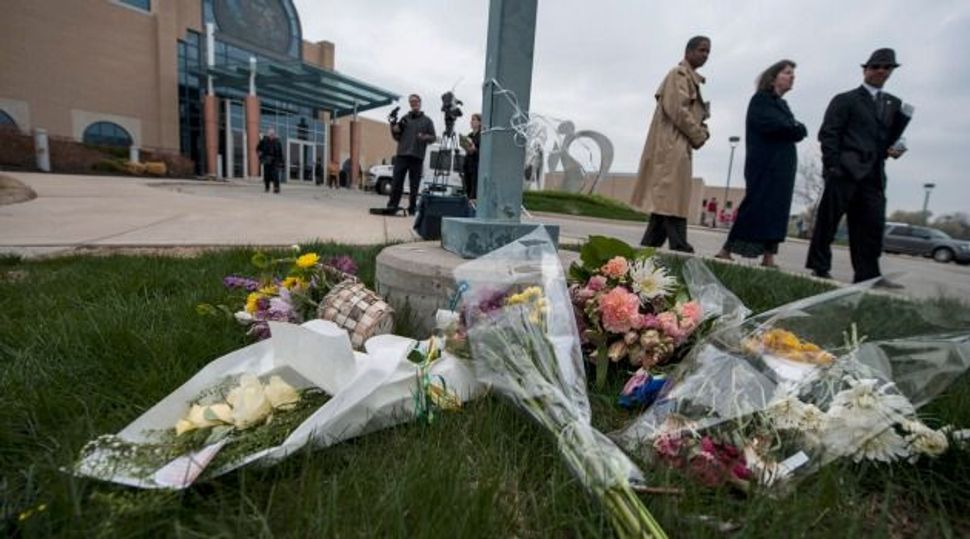 Thousands of mourners filled a church in Kansas on Friday to remember a teenager and his grandfather who were shot dead outside a Jewish community center last week in a suspected anti-Semitic hate crime.

Adam Hamilton, the senior pastor of the United Methodist Church of the Resurrection, called on the more than 3,000 mourners to “stand in the gap” against evil and hatred as they paid tribute to Reat Underwood, 14, and his grandfather, William Corporon, 69.

The two, who were not Jewish, were gunned down on their way into the Jewish Community Center in Overland Park where Underwood planned to audition for a singing competition.

A third victim, 53-year-old Terri LaManno, who was a practicing Catholic, was shot dead a few minutes later outside a nearby Jewish retirement facility. The funeral for LaManno was held on Thursday.

Overland Park, in the state of Kansas, is a suburb of Kansas City, Missouri. The United Methodist Church of the Resurrection is located in Leawood, a neighboring suburb of Overland Park.

Boy Scouts dressed in uniform seated people at the funeral as music played in the background, including the song “You’re Gonna Miss Me When I am Gone.” The song is one that Reat, who was working to achieve the highest rank of Eagle Scout, had planned to sing at his audition at the community center, according to his family.

Pictures of Reat and his grandfather flashed across the video screens on either side of the sanctuary. Children carried carnations, and dozens of bouquets of flowers spilled over the altar.

“We want to celebrate their lives in a big way for Reat and Bill were amazing people,” Karen Lampe, executive pastor at the church, said at the start of the service.

Lisa Morrison, who was attending the funeral with her 11-year-old son, a friend of Reat’s family, said they wanted to let family members know they are not alone in their grief.

“I believe it is a tragedy for our nation that we still have individuals in our society who would hate and kill someone just because of their religion,” said Morrison, who lives in Overland Park.

While all of the victims were Christian, authorities have said the suspect in the shootings outside Jewish facilities was an avowed white supremacist who was targeting Jews.

The killings, which took place the day before the start of the Jewish celebration of Passover and a week before the Christian Easter holiday, have resonated across the United States.

Leaders from a range of religious organizations have called for unity to combat ongoing hatred and violence. The Kansas City Interfaith Council has called for a “global prayer for community peace” to honor the victims and their families on Sunday.

At the service on Friday, Corporon was remembered as a physician who practiced family medicine in Oklahoma before moving to the Kansas City area to be closer to his grandchildren.

Reat, who called his grandfather “Popeye,” was described as a gifted singer and performer who participated in debate, choir and theater at the local high school where he was a freshman.

There was little talk of the suspect in the killings. Frazier Glenn Cross, 73, also known as avowed white supremacist Glenn Miller, is being held on $10 million bond on a charge of capital murder and premeditated first-degree murder for the killings.

Federal prosecutors have said they also plan to file federal hate crime charges against Cross, known by law enforcement as a senior member of the white supremacy movement and someone who had made repeated threats against Jewish people.