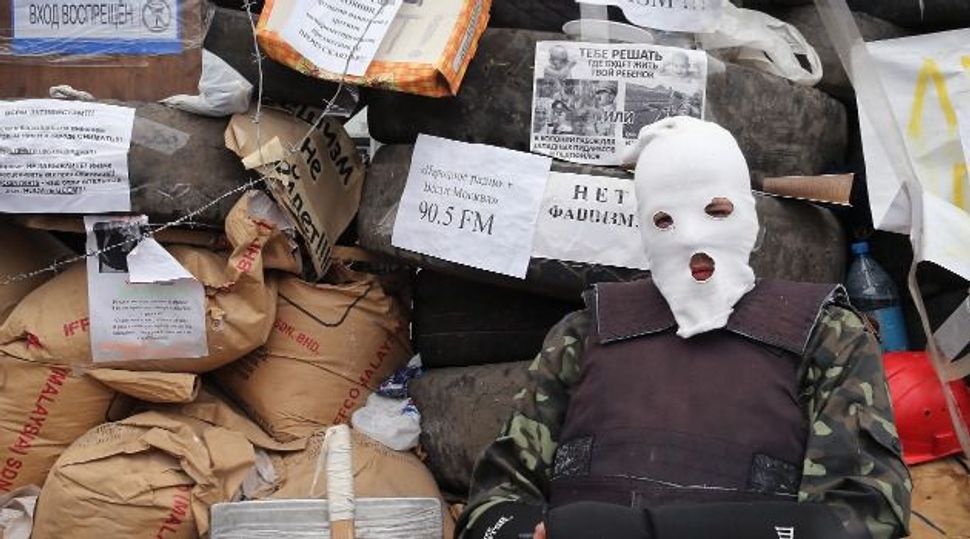 Ukrainian separatists pledged to combat “zombie Zionists” in what appeared to be a promotional video for a newly-launched pro-Russian television channel.

The video was one of the first materials shown by KPE TV, which was established on Sunday, the news website tvplus.dn.ua reported Monday.

Coming amid a string of anti-Semitic attacks and incidents in Ukraine, the video showed three men standing in what appears to be a broadcast room while boasting about the new television channel.

Twenty seconds into the video, one of the three unnamed men is seen describing the channel as “a powerful blow to the biblical matrix and zombie Zionist.”

The television channel is based in Slovyansk, a city located 60 miles north of Donetsk in eastern Ukraine, where three unidentified men last week handed out anti-Semitic fliers calling on Jews to register with authorities and pay a special fee for what the fliers’ authors called Ukrainian Jews’ pro-Ukrainian sentiments.

Separatist leaders have denied any involvement in the distribution of the fliers, calling them a provocation.

Several areas in eastern Ukraine, where many millions of ethnic Russian live, have seen separatist rioting against the Ukrainian government, which came to power last month after the ousting of former president Viktor Yanokuvych in a revolution that erupted over his perceived pro-Russian policies.

Since the revolution erupted in November, Ukraine, which has relatively low levels of anti-Semitic violence, has seen several serious attacks including a stabbing and the attempted torching of two synagogues, most recently last week in Nikolayev.

The Ukrainian government and Russian government officials, as well as their supporters in Ukraine, have exchanged allegations of anti-Semitism.