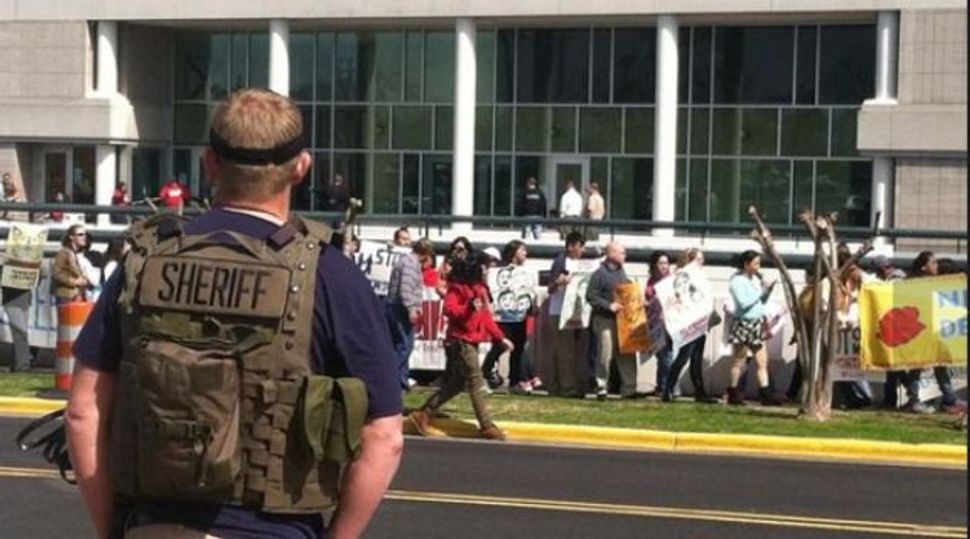 A Jewish man being held in a jail in Alabama has filed a federal lawsuit demanding that prison authorities serve him kosher food.

Rafael Alberto Lloveras Linares is a federal immigration detainee from Venezuela. He claims in his lawsuit that he is not being served kosher meals as required by federal law, according to the online edition of the Huntsville Times.

The lawsuit was filed last week in United States District Court for the Northern District of Alabama.

Linares said in his lawsuit that he met with the prison chaplain and complained that the meals he is being served are not kosher. He asked to be able to observe the Shabbat, meet with a rabbi once a month and to celebrate the major Jewish holidays.

A spokeswoman for the Etowah County Sheriff’s Department told the newspaper on Friday that the meals are prepared on-site and that they are kosher.

A federal law passed in 2000 calls on the prisons services to accommodate where possible prisoners’ religious practice.

The U.S. Immigration and Customs Enforcement agency, which contracts with the county jail to house the immigration detainees, told the newspaper that it also works to accommodate detainees’ religious preferences.

“With the exception of fresh fruits and vegetables, the facility’s kosher-food purchases shall be fully prepared, ready-to-use, and bearing the symbol of a recognized kosher certification agency,” the agency’s policy reads. “Any item containing pork or a pork product is prohibited. Only bread and margarine labeled ‘pareve’ or ‘parve’ shall be purchased for the common fare tray.”

Linares has been detained by the U.S. Immigration and Customs Enforcement agency since July 2010, when h e was arrested for overstaying a 1995 tourist visa. He applied for asylum saying that as a Jew in Venezuela his life is in danger.

A federal judge has ordered him deported, but he has refused to board planes to return him to Venezuela four times. He has an arrest record which includes convictions for trespassing, driving with a suspended license and eluding law enforcement, according to the Huntsville Times.