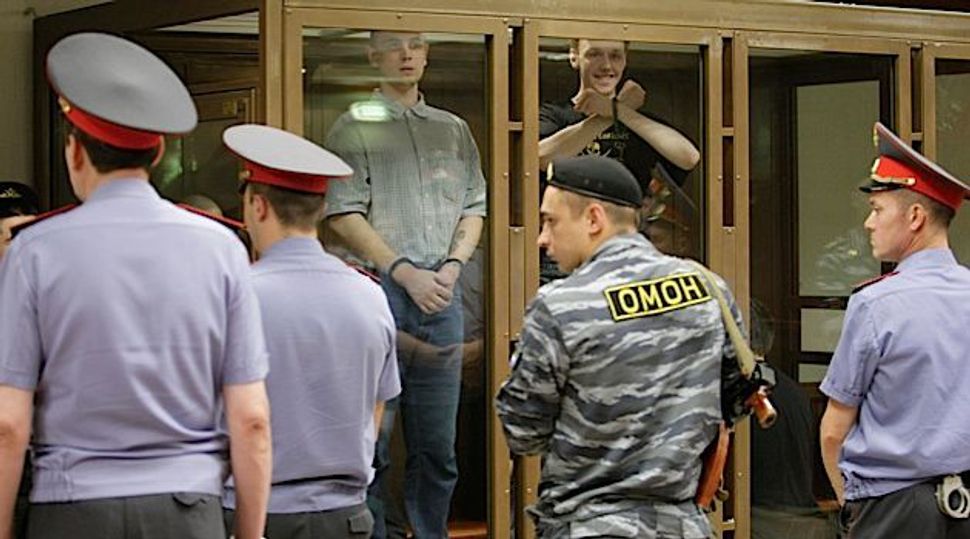 Members of an ultra nationalist group face off against Russian guards. Image by Getty images

Russian President Vladimir Putin signed a law on Monday making the denial of Nazi crimes and distortion of the Soviet Union’s role in the World War Two a criminal offence punishable by up to five years in jail.

The law, described by critics as an attempt to curb freedom of expression to appease conservative Russians, the ex-KGB spy’s main support base, also criminalises the public desecration of war memorials.

The Kremlin has used World War Two as a pillar to unite a society that Putin has said lost its moral bearings following the 1991 Soviet collapse.

It has become increasingly risky for Russians to dispute an official line that glorifies the wartime achievements of the Soviet leadership and plays down its errors.

The new law would ban “wittingly spreading false information about the activity of the USSR during the years of World War Two”.

Russian officials and media have raised the spectre of Nazi Germany repeatedly during Moscow’s confrontation with the West over Ukraine, calling the overthrow of a Russian-allied president in February a coup carried out in part by “neo-Nazi” forces.

Independent channel Dozhd (TV Rain) was taken off the air earlier this year after asking viewers whether Leningrad, now St Petersburg, should have been given to German troops to save lives during its 872-day siege during World War Two.

Viktor Shenderovich, a blogger critical of the authorities, came under fire from Kremlin supporters in February after comparing the Sochi Olympics to the 1936 Berlin Olympic Games, used by Adolf Hitler to burnish the image of the Nazi Germany.

In a comment posted when the legislation was first introduced, veteran TV host Vladimir Posner said he believed its aim was “to shut the mouths of journalists, historians and writers”.

He said he feared it would “practically ban criticism of Stalin” for “grave mistakes that led to the deaths of hundreds of thousands of our soldiers”.

It was unclear whether the wording of the bill had been changed since its introduction and Posner could not immediately be reached for comment.

Kremlin critics say Putin, in power since 2000, has used legislation, court cases and other levers to tighten control during his current term, which he won despite large opposition protests in 2011-2012. Putin denies the accusations.

Separately on Monday, Putin signed a law imposing fines for the use of expletives on television, radio and in films shown in theatres. Music and movies containing foul language will have to have a warning on the label, state-run RIA news agency said.

Putin also signed a law imposing stricter rules on bloggers, which opponents say is aimed at suppressing criticism on the Internet.