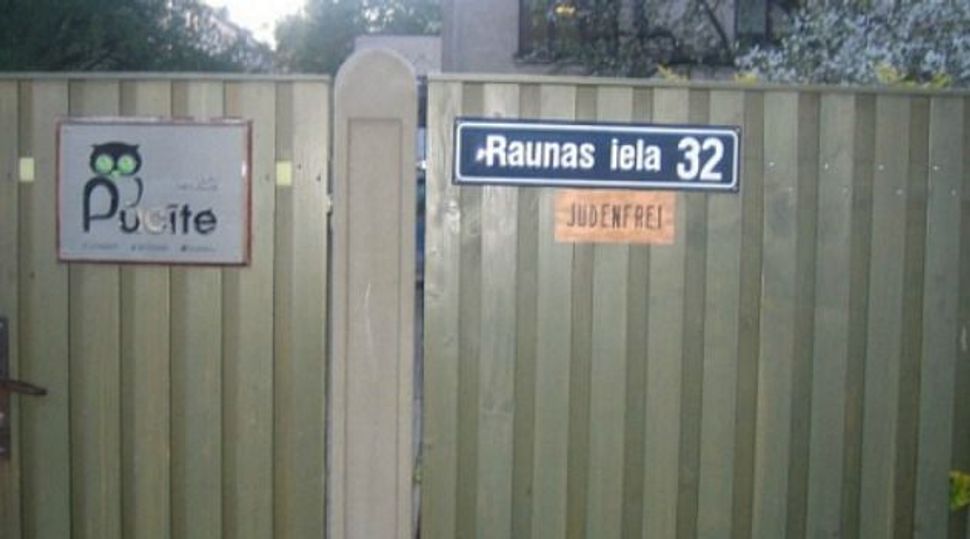 The entrance to a nursery school in Latvia owned by an traditionalist lawmaker featured a German-language sign that advertised the establishment as being “Jew-free.”

The posting of the sign, which reads “Judenfrei,” was revealed Monday by the Latvian daily Vesti Segodniya. The paper published a photo of the sign on the fence of the Pucite (“Owlet”) private school.

According to the Coordination Forum for Countering Antisemitism, the establishment is owned by Imants Paradnieks, an ultranationalist Latvian lawmaker.

On Tuesday, Twitter users confronted him to ask whether the sign was genuine or just “a provocation.” He provided no reply, but wrote: “The Kremlin is full of jackals.”

The Riga-based school has a history involving Nazi sympathies. In 2012, Pucite hosted two men dressed in Waffen SS uniform, who held what they defined as “a lesson of patriotic upbringing” for the kindergarten department of the school.

A video of the lesson, which was uploaded to the kindergarten’s website, showed two men encouraging three-year-old children to play with World War II-era weapons. The men were identified by the Russian news agency RIA Novosty as Ivo Lembergs and Normund Erums, both members of the Latvian Soldier Association.

On its website, Pucite is described as a school based on “the Latvian national culture, Latvian wisdom and view of the world – where all children learn through play and hands-on experiences.”

After its occupation by Nazi Germany in 1941, a collaborationist government helped set up the Latvian Legion, a force of roughly 90,000 men who were part of Germany’s SS elite units.

Some ultranationalists in Latvia today regard them as heroes who helped fight off the Soviet occupiers until Latvia was once again incorporated into the Soviet Union after Germany’s defeat.

Latvia had a Jewish population of some 95,000 before the Holocaust. Nazi troops and local volunteers decimated the community.