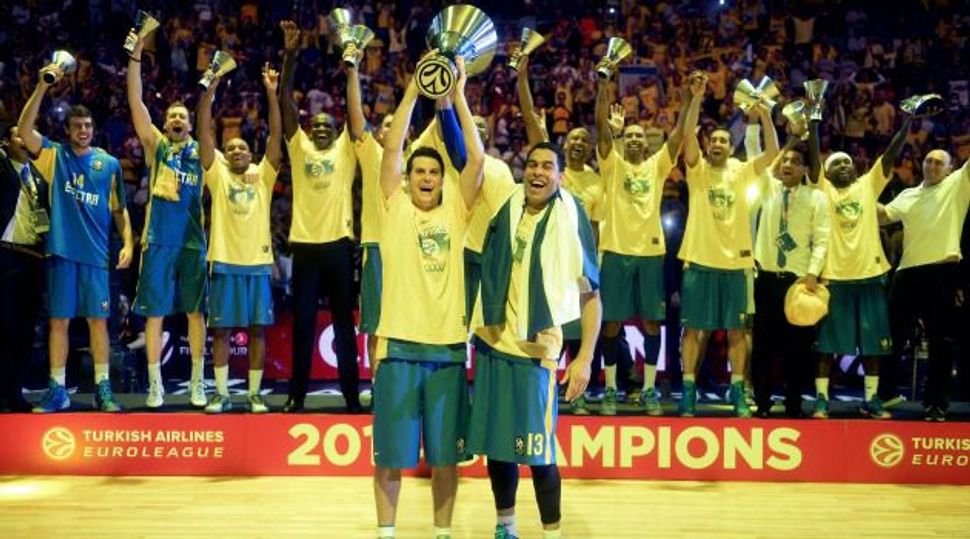 Maccabi defeated the Spanish squad, 98-86, in overtime on Sunday night in Milan in the title game. Tyrese Rice led the Israeli club with 26 points, including 14 in overtime. The game was tied at 73 following regulation.

A huge contingent of Israelis traveled to Italy for the game — some estimates said at least 10,000. Many of the Maccabi fans dressed in the team’s yellow and waved yellow-and-blue banners and the team’s flag, a yellow-and-blue version of the Israeli flag, with the star of David in the center.

Manuel Berti on the Italian Basketinside blog called the victory a “masterpiece” that was “incredible, crazy, surreal.” He added, “It is the triumph of an entire people, who arrived en masse to fill and color the streets of Milan.”

Maccabi had reached the finals with another upset victory, over CSKA Moscow, in the semifinals on Friday. The Israeli club rallied from a 15-point deficit to win.

President Shimon Peres phoned Coach David Blatt after the finals victory to congratulate him — and said the dramatic game had almost given him a heart attack, The Jerusalem Post reported.

It was the sixth Euroleague title for Maccabi Tel Aviv and its first since 2005.