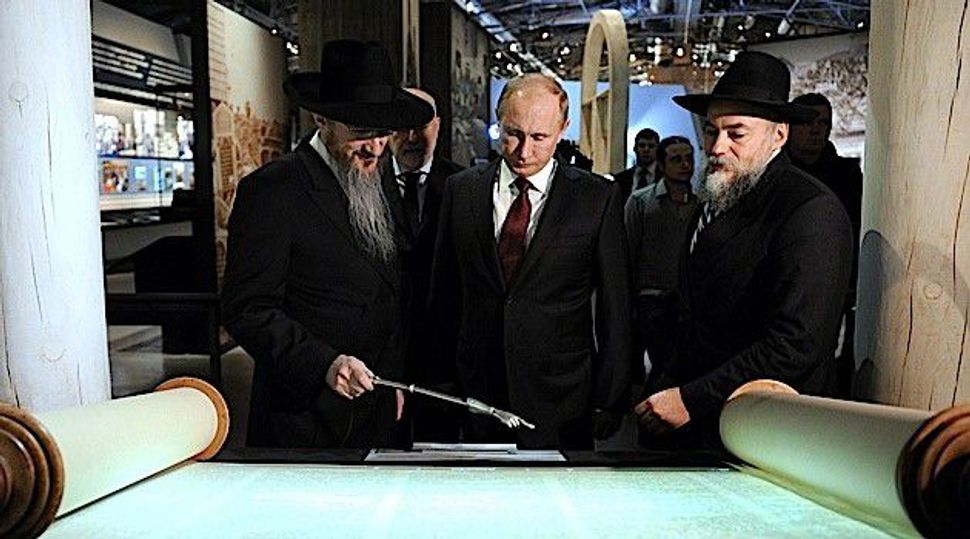 A Russian court demanded on Thursday that the U.S. Library of Congress hand back seven precious Jewish texts to Moscow – and, in a tit-for-tat ruling, said it should pay a massive fine for every day it delays.

The so-called Schneerson collection, claimed by both Russia and the New York-based Hasidic Chabad-Lubavitch group, has become a bone of contention in Russia-U.S. ties, at their lowest for decades due to the Ukraine crisis.

The Library of Congress has seven books of the collection, Interfax reported. Russia has 4,425 texts, including editions of the Torah and the Talmud, some of them dating back to the 16th century.

A Moscow arbitration court ruled that the Library of Congress should pay $50,000 in fines for every day the seven books are not handed over. Moscow reacted angrily when a U.S. judge ruled last year Russia should pay $50,000 a day for failing to send the rest of the collection to the United States.

“Moscow’s arbitration court on Thursday upheld the claim by the Russian State Library and the Ministry of Culture of the Russian Federation against the U.S. Library of Congress,” Interfax reported.

Ties between Moscow and the United States have deteriorated to their lowest point since the Soviet Union collapsed in 1991, as the West adopts sanctions against Moscow because of its annexation of Crimea.

The seven books in question were loaned to the United States in 1991 for 60 days, but never returned, Interfax reported.

A portion of the collection in Russia has been put on display in a Moscow museum of Jewish culture, a move President Vladimir Putin said he hoped would end the spat over ownership.

“I hope that moving the Schneerson library to the Jewish Museum and Tolerance Center … will put an end to this problem once and for all,” said the former KGB spy, who has sought to portray Russia as country of religious tolerance while fostering close ties with the Russian Orthodox Church.

The collection spent World War One in a warehouse in what is now western Russia’s Smolensk province, before being found by the Bolsheviks and later moved to the Russian state library.

Another part of the Schneerson collection rests in Russia’s military archive, after being confiscated by Soviet troops in Nazi Germany during World War Two.

Those papers had fallen into Nazi hands after their last private owner, the late Chabad-Lubavitch rabbi Yosef Schneerson, fled the Soviet Union in late 1920s and wandered eastern Europe in search of safety.

The Chabad-Lubavitch community originated in the Tsarist Russian Empire and Yosef Schneerson was born into it in 1880. He set up the collection to bring together religious books and writings of his kin before moving to New York where he died in 1950.

Up to a million Jews remain in Russia after the population dwindled in Tsarist-era pogroms, Soviet oppression of religion and emigration in recent decades.