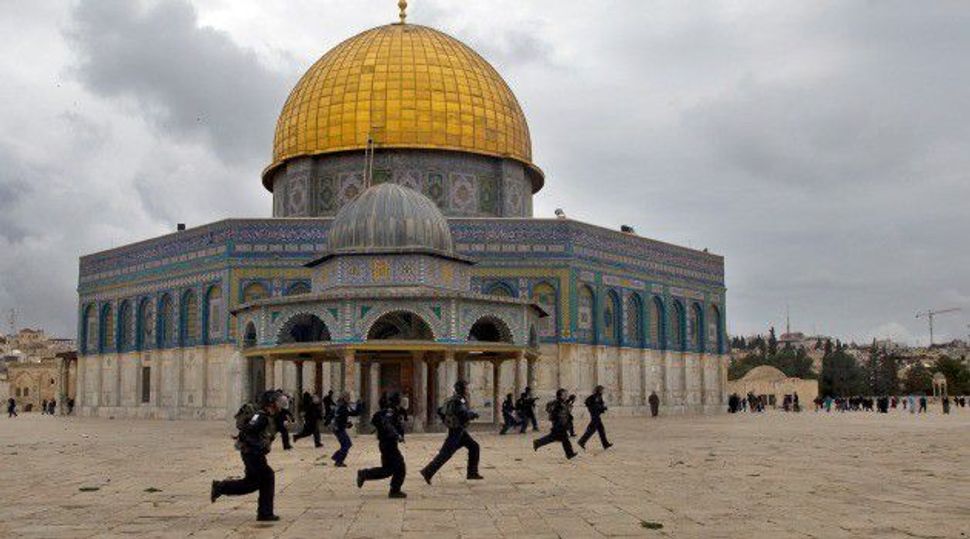 Whose City? Violence flared on the Temple Mount as Israelis celebrate — and Palestinians mourn — the Israeli seizure of East Jerusalem. Image by getty images

An Israeli minister marked Jerusalem Day by calling for a one-state solution to the conflict with the Palestinians — as the Temple Mount was closed following clashes between Muslim worshippers and police.

Four Palestinians and an Israeli police officer were reported injured in the Wednesday morning clashes.

Masked Palestinians threw rocks and firecrackers at Jewish security forces on the Temple Mount. The attackers barricaded themselves in the Al Aksa Mosque after being pursued by Israeli police. Israeli police used rubber bullets to disperse the rioters, according to Palestinian reports.

The Temple Mount was closed to visitors following the clashes.

Muslim worshippers on the Temple Mount also threw rocks Tuesday at a group of Jews visiting the site. The annual Jerusalem Day flag procession through the Old City of Jerusalem will take place late Wednesday afternoon, with thousands expected to participate. Jerusalem Day marks the reunification of Jerusalem during the Six Day War in 1967.

Meanwhile, at a Tuesday evening program in honor of Jerusalem Day at the Mercaz Harav Yeshiva, Israeli housing minister Uri Ariel asserted that there would not be any more housing freezes in the West Bank and Jerusalem.

“We will not come to terms with the delays and restrictions [on construction] in Jerusalem and Judea and Samaria, and we will continue to build in all parts of our land,” Ariel said. “Jerusalem will never again be divided. Between the Jordan River and the sea, there will be only one state: the State of Israel.”