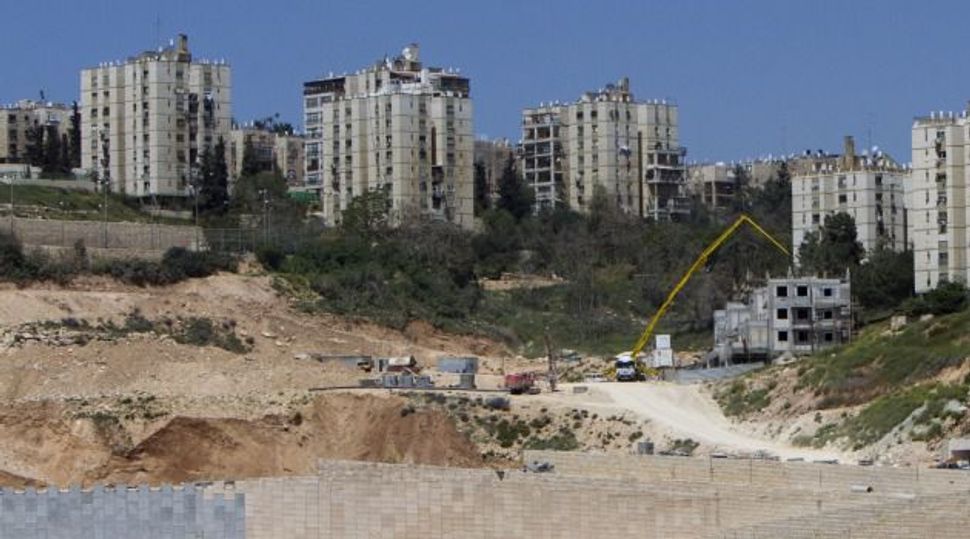 (Reuters) — Palestinians in the village of Kufr al-Deek in the northern occupied West Bank awoke on Sunday to see Israeli earth-movers busily flattening the top of a nearby hill.

Locals say it is their privately-owned land and that the Israeli government is preparing to build a new Jewish settlement outpost there.

They fear it will help consolidate a bloc of Israeli towns, plunging almost halfway into the occupied territory, which they say will deny them a viable future state.

“(Israel) wants to link up their colonies, from Ariel to the coast and they need our land to do it,” said villager Ismail Taha, hoarse from shouting at the dozens of Israeli soldiers who prevented him and other residents from reaching the work site on Monday.

They say a pair of settlers began squatting on the hillside last week and fear it will be the nucleus of a new community.

“It’s stealing, and we have no means to defend ourselves. While they have biased courts, police and an army, we have no money and no power. We’re peaceful, but over our dead bodies will they succeed in taking our land,” Taha said.

Israel and the United States believe the communities in the Ariel settlement bloc, founded mostly in the 1980s, are now too large and well-established to be evacuated in any future peace agreement – a prospect rendered even more distant by the collapse of U.S.-backed peace talks with the Palestinians last month amid mutual blame.

Palestinian officials have entertained the idea for swapping those lands for others in Israel during closed-door negotiations, but publicly say that they are entitled to a state in all of Gaza, the occupied West Bank and East Jerusalem – lands Israel captured in the 1967 Middle East war.

The settlers, who number well over half a million in total, cite religious and cultural ties to the land.

Israeli Prime Minister Benjamin Netanyahu said that the Ariel area, which he calls the “Tel Aviv suburbs,” and other settlement blocs around Jerusalem and Bethlehem will stay put.

The International Court of Justice deems the settlements illegal. While the European Union has said it “deplores” them and the United States calls them “illegitimate,” countries have taken few obvious steps to slow their spread.

Israel has declared the 300-dunam (74-acre) tract traversed with olive trees and dirt paths “state land,” a label it has applied to much of the other lands upon which settlements and their connected farming lands have been historically built.

“The present case refers to declared state lands on which approved works are taking place lately for the agricultural development of the region. The works are under constant supervision and monitoring,” the Israeli government body responsible for the occupied West Bank told Reuters.

Residents of Kufr al-Deek and other villages disagree with the “state land” claim and say settlement activity is expanding.

They point out ruined Palestinian cisterns and modest homes on the hill they say Israeli forces demolished in recent months. Looking out on the horizon, the string of nearby settlements appear to be growing, with a whole hillside next to one being flattened ahead of apparent planned constuction and settler portacabins pouring down the hillside of another.

“Kufr al-Deek is 300 years old and look how small it is. Just one of the settlements there, built in 1985, is already twice its size. Tell me, where can we build our state?” villager Ahmed Ali said.