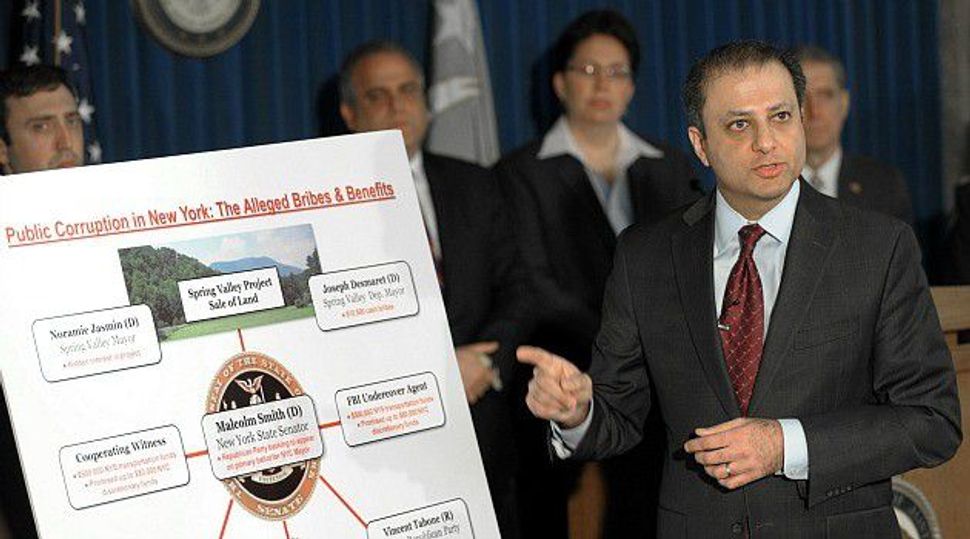 Not Kosher: U.S. Attorney Preet Bharara outlines the wide-ranging corruption sting that felled several top New York politicians. A lynchpin in the case was a Jewish developer who helped reel in the elected officials. Image by getty images

A sprawling New York state corruption trial could reportedly be seriously delayed or even derailed by some 300 recordings of an upstate Hasidic wheeler-dealer chatting in Yiddish.

A federal judge is considering his options after defense lawyers for disgraced state Sen. Malcolm Smith complained that they had not had a chance to listen to the 300 recordings, the New York Times reported.

In fact, they don’t even speak Yiddish. Neither do the the prosecutors, nor does Judge Kenneth Karas.

The judge appeared poised to order a far-reaching review of the tapes, which could take months, although he gave prosecutors a chance to argue that the case could go forward without them.

The tapes are of phone calls involving Moses Stern, a Hasidic developer from upstate Rockland County who agreed to be a government informer in exchange for leniency.

The complex chain of events begin with an allegedly corrupt deal between Stern and Noramie Jasmin, the mayor of Spring Valley, N.Y.,

The upstate ultra-Orthodox population has a major presence in the village of Spring Valley. Spring Valley is near the predominantly Orthodox towns of Monsey and New Square, and it consists of part of the East Ramapo school district, which has been at the center of bitter, ongoing fights between the area’s non-Orthodox and Orthodox communities.

According to the federal indictment, Stern negotiated with Jasmin in February of 2012 to jointly develop a piece of property owned by the village of Spring Valley adjacent. The two agreed that Jasmin’s stake in the project would be hidden, and that in return Jasmin would ensure it received quick approval from the village.

The indictment also alleges that Stern paid off another member of the village’s board of trustees, Joseph Desmaret, for his support of the project.

Unknown to the two local officials, Stern had agreed to cooperate with the feds in exchange for leniency on an unrelated criminal case.

Stern and an undercover FBI agent posing as a developer went on to offer assistance to Smith and Halloran in an alleged plan to buy access to the Republican line on the New York City mayoral ballot in return for state and city cash. Activists in the Spring Valley area say that the alleged corruption in the village’s political leadership raises broad questions about town business dealings with developers, including other ultra-Orthodox figures.

Jasmin and Desmaret are both Haitian Americans. Jasmin was seen as being particularly close to the town’s Orthodox leadership.

Stern, for his part, is said to be an influential Orthodox activist with ties to local politicians and a potent ability to pull electoral strings. His former attorney, Sherri Eisenpress, was elected to serve on the Rockland County family court with broad Orthodox support. That support was surprising, given that Eisenpress is openly gay, usually a non-starter with socially conservative Hasidim.

Stern has also suffered a series of personal setbacks in recent years. Besides the undisclosed case that led to his involvement in the Spring Valley probe, Stern lost a $126 million judgment against Citigroup in 2010. That stemmed from a real estate venture involving malls in the southern United States that went bad. More recently, in February of this year, Stern lost an $117,000 lawsuit to his own former attorneys, who sued for nonpayment of legal bills.

The project on which Jasmin allegedly colluded with Stern was provisionally approved by the town’s trustees at a meeting in October. Spring Valley trustee Anthony Leon was the only member of the town board not to vote to approve the deal.

In fact, the developers who proposed the plan to the board were all undercover FBI agents. Jasmin allegedly believed that the agents were straw bidders colluding with her to purchase and develop the town’s property.