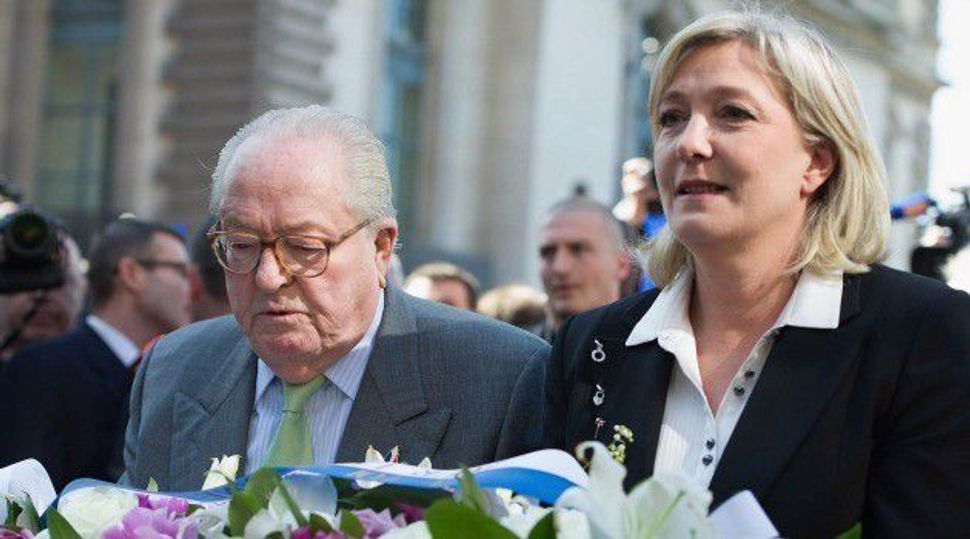 The website of France’s far-right National Front party has resumed offering access to the blog of party founder Jean-Marie le Pen, after the deletion of his speeches because of their allegedly anti-Semitic references.

The party’s website used to host directly videos of interviews on current affairs with Le Pen, but since Thursday its homepage features a banner which redirects readers to Le Pen’s new personal website, www.jeanmarielepen.com. The videos were removed from the party’s website earlier this week after the publication on June 6 of Le Pen’s 366th post, in which he said of the French Jewish singer Patrick Bruel “we will put him the oven.”

The statement by Le Pen, who has multiple convictions for inciting racial hatred against Jews and making hate speech about the Holocaust, were widely interpreted as an anti-Semitic reference to the burning of Jewish bodies by Nazis in crematoria during the Holocaust, though Le Pen denies this.

He said he did not know Bruel was Jewish and hinted the oven reference meant applying pressure on Bruel, who is a vocal critic of National Front.

The website and party is run by Marine Le Pen, Jean-Marie Le Pen’s daughter, who has tried to soften the party’s xenophobic and anti-Semitic image since her election as party leader in 2011.

On Friday, Jean-Marie Le Pen published an open letter which he addressed to his daughter, calling her “Madame President.”

In the letter, Jean-Marie Le Pen accused his daughter of ceding to the pressure of “a media campaign triggered by sycophants, the hound dogs of anti-Semitism.” It was the latest comment in a discordant exchange of accusations between father and daughter since the June 6 publication, which generated a passionate slew of condemnations from civil society leaders and politicians from inside France and beyond.

Marine Le Pen defended her father’s use of the word “oven” as not being anti-Semitic, but said he committed a “political error” when he failed to anticipate how it would be perceived.

“If a ‘political error’ occurred, then it was not mine but that of National Front bosses who gave it [the campaign] credence with their declarations,” Le Pen wrote. He also complained that his daughter had failed to consult him before taking action.

On May 25, National Front under Marine Le Pen won 25 percent of the vote in France for the European Parliament, beating all other French parties including the governing Socialist Party of President François Hollande by more than 10 percent.