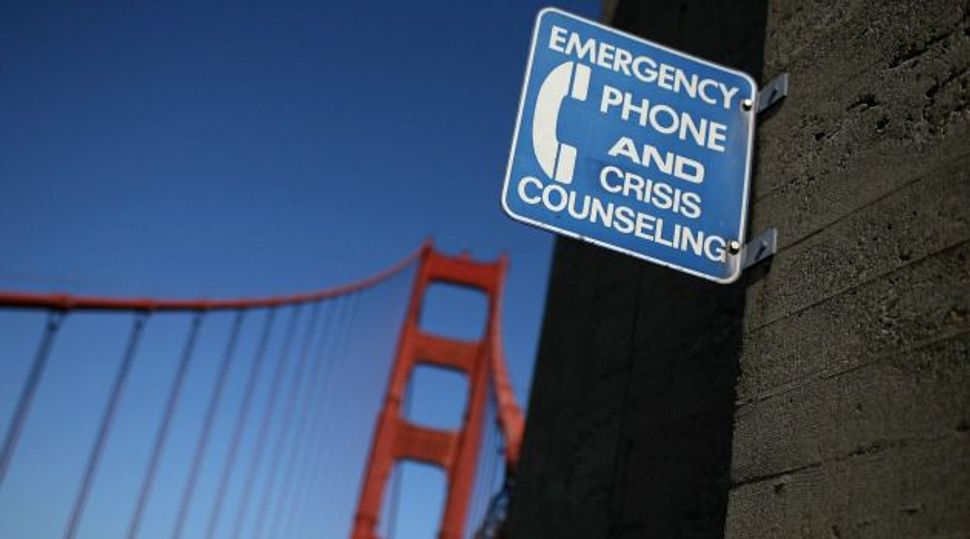 Lifeline: A sign for an emergency phone is seen on the span of the Golden Gate Bridge in San Francisco, California. Image by Getty Images

The Golden Gate Bridge may adopt some drastic changes in the near future. The Board of Directors of the Golden Gate Bridge, Highway and Transportation District officially approved funding to erect nets underneath the bridge to deter or save suicide jumpers.

Last year alone, 46 people fell off the bridge, and about 100 more were stopped by bridge workers. Of the approximately 1,600 people who have jumped, only 33 have survived.

Congregation Sha’ar Zahav of San Francisco is a haven for LGBTQ Jews in the bay area. Members have taken significant steps to spread awareness of the danger the Golden Gate Bridge represents to those who suffer from mental health problems, oppressed members of the LGBTQ community, and anyone else who might think of committing suicide.

Rabbi Angel of Sha’ar Zahav voiced support for the nets and added, “The LGBTQ community does have a higher rate of suicide so it is incumbent on our community to make this a priority.”

Many have said that the nets will mar the classic look of the Golden Gate Bridge. To this, Rabbi Angel said resolutely, “Our tradition calls us to save lives, and it trumps aesthetics.”

However, she later warned, “I know these nets are not the answer. They are not ultimately the answer to mental health issues, but they are essential to doing what we can at this time.”

On August 7, 2012, the 75th anniversary of the first suicide off the Golden Gate Bridge, Sha’ar Zahav held a public Yizkor memorial service for the fallen.

“We had a sanctuary full of people, mostly non-Jewish people, but also some Jews, who had come to remember loved ones who had taken their lives on the bridge,” Rabbi Camille Angel recalled.

Since the Yizkor two years ago, Sha’ar Zahav has continued to advocate for suicide prevention. Last week, they participated in a national conference of suicide prevention counselors, and the year before the Executive Director of San Francisco Suicide Prevention, Eve Meyer, spoke to graduating seniors about being in a position to save a life themselves.

San Francisco’s Golden Gate Bridge Board of Directors unanimously approved the plan to erect a 20-foot-wide steel net beneath the bridge. The federal government will cover $50 million of the costs, and the Board will fund an additional $76 million.