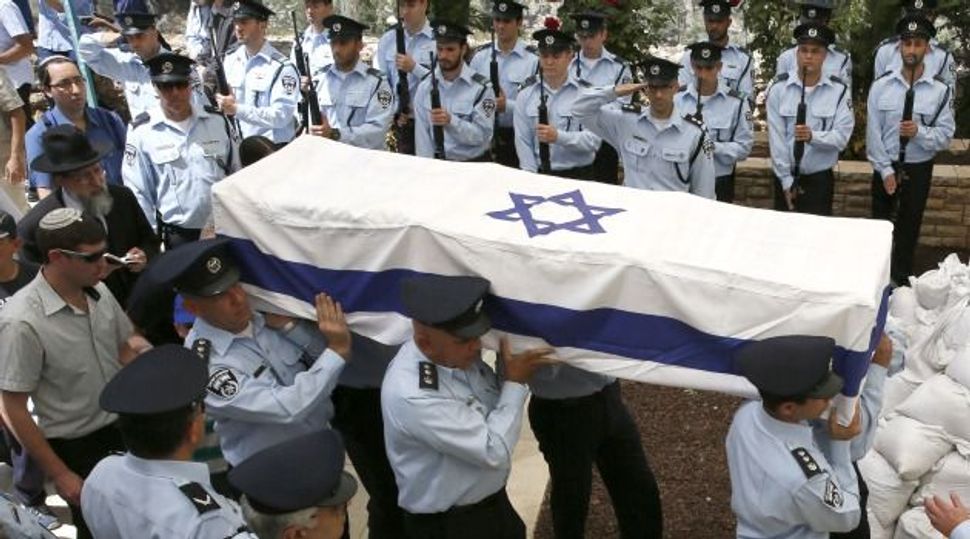 Unhappy Holiday: Israeli police officers carry the coffin of slain Chief Superintendent Baruch Mizrahi, who was shot in an ambush on the eve of Passover. Image by Getty Images

The Israeli military can raze the home of a Palestinian man indicted for the Passover eve murder of police officer Baruch Mizrahi, Israel’s Supreme Court ruled.

The family of Ziad Awad on Tuesday morning was given 12 hours to remove their possessions from the residence before the demolition order takes effect.

The apartment at the top of the building, where Awad resided, is set to be demolished, but two other apartments and storage areas, owned by Awad’s brother, will remain intact, according to the court order.

On Passover eve, April 14, a gunman firing at civilian vehicles traveling near Hebron killed Police Chief Superintendent Baruch Mizrachi. The attack also critically injured his wife and wounded a child traveling in a second car. The shooters fled the scene.

Awad and his son, Izz Eddin Hassan Ziad Awad, were arrested last month. Ziad Awad, who was released in the 2011 Shalit prisoner exchange, is a Hamas operative who has been jailed previously for the murder of Palestinians who were believed to be cooperating with Israeli security forces. His son, 18, admitted under questioning that his father ​had shared with him his intentions to execute a terror attack against Israelis on Passover.

The Supreme Court justices said in their decision that, despite pleas that the home not be destroyed because it would harm other innocent family members, the family shared the guilt because it was aware of Ziad Awad’s plans and collaborated with him.

The HaMoked Center for Defense of the Individual said in a statement issued after the court decision that “house demolitions constitute collective punishment, and are contrary to both international law and the basic precept of Israeli law that a person must not be punished for the acts of others. The demolition of houses does not replace criminal punishment but supplements it, and its chief victims are the occupants of the demolished house rather than the alleged perpetrator, who in most cases has been imprisoned or killed.”