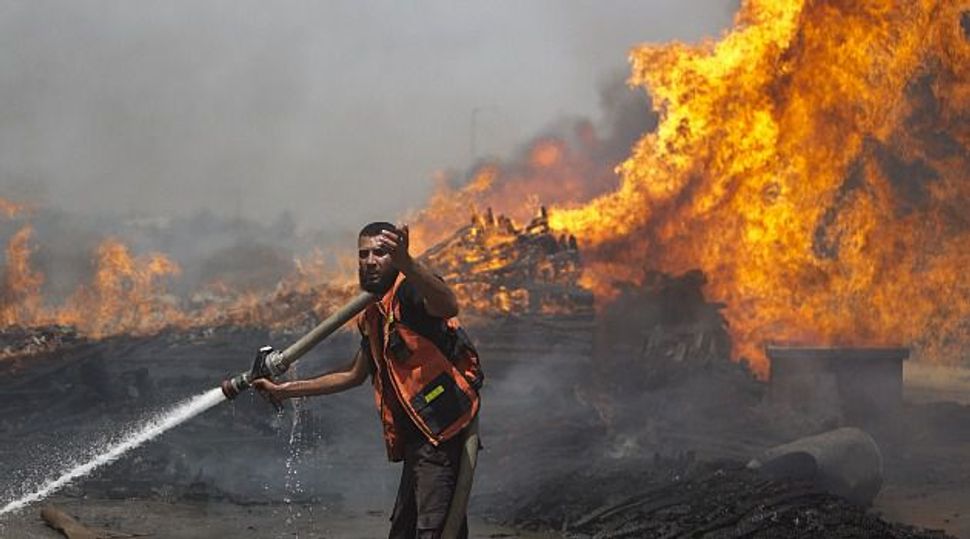 The Israeli military’s “pinpoint strikes” on houses in Gaza have killed whole families and children but few of the wanted men they are meant to target because they have long made themselves scarce, Palestinian residents say.

After five days of cross-border barrages between Gaza militants and Israel’s air force, at least 81 of the 121 Palestinians killed have been civilians, including 25 children, according to Palestinian medical officials.

While relatively few militants and even fewer of their commanders have been killed, according to Hamas sources and media reports, Israel appears more determined than in previous wars to bring the fight to their homes in the densely populated enclave hugging the Mediterranean coast.

Kin, neighbors and others who deny any ties to militants have been most often in the firing line of Israel’s assaults.

“I still can’t believe this happened, it’s like a bad dream,” said Shadi Hamad, standing in the demolished courtyard of a family home with tearful relatives.

“It was 11 at night and the family had just sat down in a circle for coffee in the front porch after breaking the Ramadan fast. The missile landed in the middle. Everyone was killed.”

The air strike was targeting Hafez Hamad, a local commander in the Islamic Jihad militant group, and killed him, as well as his parents, two brothers and niece.

“Where were their human rights, which Israel and its backers say they defend?” said Bassam Qassem, a neighbor. “Even if he (Hamad) was a resistance fighter, does that allow them to kill his whole family? This is murder.”

For their part, nervous Israeli civilians have for days had to heed warning sirens to seek shelter from Palestinian rockets, around 700 of which have lobbed from Gaza since Tuesday. They have so far caused no Israeli fatalities, but some injuries and damage.

Israel disavows any responsibility for the Gaza deaths, saying Hamas stows its people and weapons among civilians and hopes to score a cheap sympathy boost from their deaths.

“We are using all our attacking capabilities, not without brains, reason – not without taking into consideration that there are also civilians in Gaza. We remember that there are civilians. Hamas has turned them into hostages,” Israeli military chief Lieutenant-General Benny Gantz said on Friday.

“We continue to attack as best we can, rockets, command centers, tunnels, munitions and defense infrastructure and Gaza is sinking into a tragedy,” Gantz said.

Early on Saturday two disabled women were killed and four other people seriously wounded when an Israeli tank shell struck a rehabilitation center in the eastern part of Gaza City, Palestinian medics said. An Israeli military spokeswoman said she was checking for details on why the center was targeted.

Residents also said a mosque in the central Gaza Strip was bombed to rubble. The military said it had housed a weapons cache.

Israel says it has attacked more than a thousand targets in the coastal territory since the recent fighting began.

MANY HOMES OF MILITANTS, POLICE TARGETED

The Gaza interior ministry told Reuters that over 200 family homes have been targeted since the Israeli campaign began, many belonging to police officers and militants but only around 15 housing high-ranking commanders.

According to the Gaza based Al-Mezan Association for Human Rights, 537 houses – 122 of them targeted directly – were either completely or partially damaged by Israeli air strikes since Tuesday.

Palestinians think the attacks are meant to sow panic and drive a wedge between them and the militants.

“They can’t find any targets this war because they’re hidden, so they’ve just decided to punish innocent people… Do you see any resistance fighters here? Of course not. They’ve gone underground days ago, disappeared,” said Aziz Abu Awdeh in the northern border town of Beit Hanoun.

“This is terrorism in every meaning of the word. Killing family members and ordinary people just brings us closer together as a people. Resistance is our right, any people in the world would defend themselves from this.”

Israel’s military has published grainy aerial footage it says shows arms caches nestled among homes, which, they say, when struck by a missile, detonate “secondary explosions.”

Outgoing rockets often appear to scream forth from near residential districts, though Hamas denies Israeli claims that it uses people as “human shields.”

In Beit Hanoun’s main hospital on Wednesday, crumps of nearby rocket fire and air strikes brought casualties pouring in. One father, comforting his bruised young son, said an outgoing rocket launch had sent the boy flying across a room.

Israel says it regularly gives warnings to residents by phone calls, text messages and dud missiles launched on their roofs to warn them in advance of attacks, but Gazans say there is not enough time to evacuate or warnings simply don’t come.

The Israeli military described a strike on the home of the Kaware family in which eight people died as a “tragic mistake”, saying residents had not heeded their warning. The army did not immediately respond to Reuters’ request for comment on their targeting policies.

A rushed voice crackled over the Gaza police radio frequency on Friday, reporting an air strike on a family house in Beit Hanoun.

The bombing’s sole victim was Saher Abu Namous, 4, who lay, pale and with his head blown open, on a steel gurney in the local morgue. The medic wrapped his plump limbs in a shroud and prepared to enclose him in a refrigerator.

Nearby, hundreds of neighbors gathered spontaneously around a household which had received a phone call from the Israeli military warning that a strike was imminent.

Hamas’s official radio station cautioned residents to stay away: “Dear listeners, please be warned that surveillance drones and an Apache helicopter are still in the area, stay well away.”

Israel’s military says it has aborted planned attacks when neighbors gather in numbers to defend homes.

The air strike has yet to come.