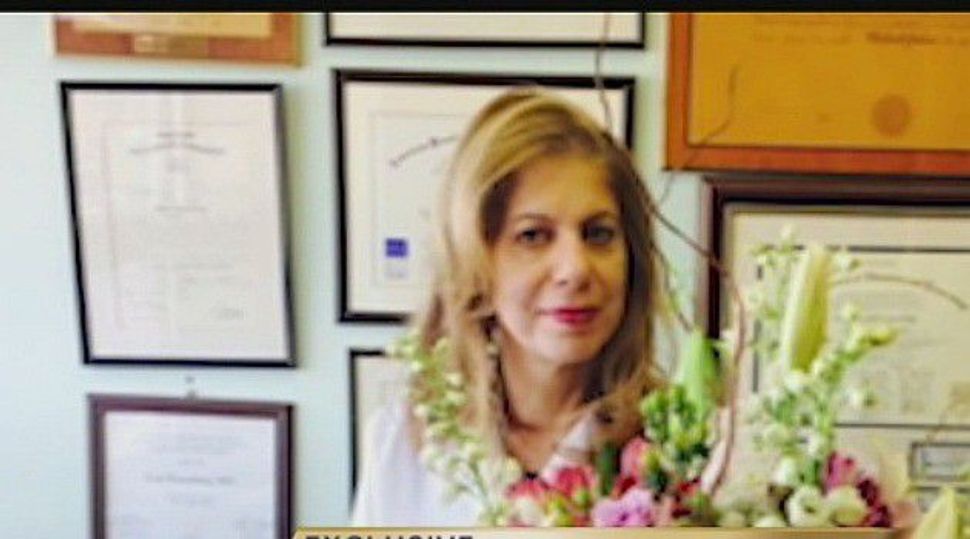 Image by courtesy of wpbf

A Jewish doctor who was ordered to leave a New York-bound JetBlue flight “ranted” at a Palestinian fellow passenger that she was a “murderer” who might blow up the flight, according to internal reports quoted on an airline security blog.

Lisa Rosenberg, an obstetrician with an office in Queens, was ousted because she “made a racial slur at the (Palestinian) customer,” and that “customers seated in the immediate area expressed concern for their safety because of Dr. Rosenberg,” a flight attendant told investigators.

The accounts from a flight attendant, along with a report of the Complains Resolution Official (CRO), and witnesses on the plane show were obtained by Steven Frischling, who works in airport security and posted snippets of the reports on his blog, Flying with Fish.

“(Dr. Rosenberg) accused the customer of being a Palestinian murderer, and that her people are all murderers, and that they murder children,” the unnamed flight attendant wrote. Rosenberg “ranted, and attempted to get physically closer to the (Palestinian) customer in (seat) 9C. I immediately insisted that she stop all type of that talk in the aircraft.”

The official accounts conflict dramatically with Rosenberg’s version of the July 7 incident as the plane prepared to leave from the West Palm Beach airport.

Rosenberg told reporters that was forced to leave the plane after arguing with a fellow-passenger about the Israeli war in Gaza. She asserted she was targeted for expulsion because of her Jewish faith and called the move an “anti-Semitic hate crime.”

She alerted the Anti-Defamation League to the incident, which said it was looking into her claims.

Rosenberg would not discuss the incident with the Forward and her lawyer, Fred Rosenberg, did not return calls seeking comment on the revelations.

Rosenberg is a OB/GYN who operates for the New York City area in Flushing, Queens. She went to the Medical College of Pennsylvania for medical school, and she completed her internship and residency at the Long Island Jewish Hospital. She speaks Yiddish, Hebrew and English.

The flight attendant suggested Rosenberg was entirely to blame in the incident, which caused a ruckus but remarkably only led to the flight arriving a respectable four minutes late at John F. Kennedy International Airport.

Rosenberg was removed from the plane because “of an atmosphere of fear in the cabin” that she had caused with her shouting and racial slurs towards the woman sitting just two rows behind her.

Before Rosenberg was asked to leave, airline officials told her about rules against discrimination, and that, “JetBlue provides equal service to all passengers regardless of race, creed or color.”

But Rosenberg refused to listen, and continued to harass the Palestinian woman for everyone to hear, despite the fact that multiple witnesses confirmed that they had seen no instigation from the Palestinan passenger in 9C, the documents said.

The final straw came when Rosenberg implied that the Palestinian woman had a bomb on her person and intended to blow up the plane.

According to Frischling, the CRO reported exactly the same account of the incident.

Frischling later added, that given his experience in working with airport security, he was surprised Rosenberg was not detained by federal Homeland Security authorities for making false claims about a potential bombing.

Frischling says as a Jew he is offended by Rosenberg’s conduct and has no doubt that JetBlue officials acted properly in ordering her off the flight. He noted the publicity around the incident makes it unusual, but unruly passengers are commonplace on American flights.

“This to me is not a religious issue,” Frischling said. “People make it a big deal — it’s not. People are removed from aircrafts hundreds of times a day.”