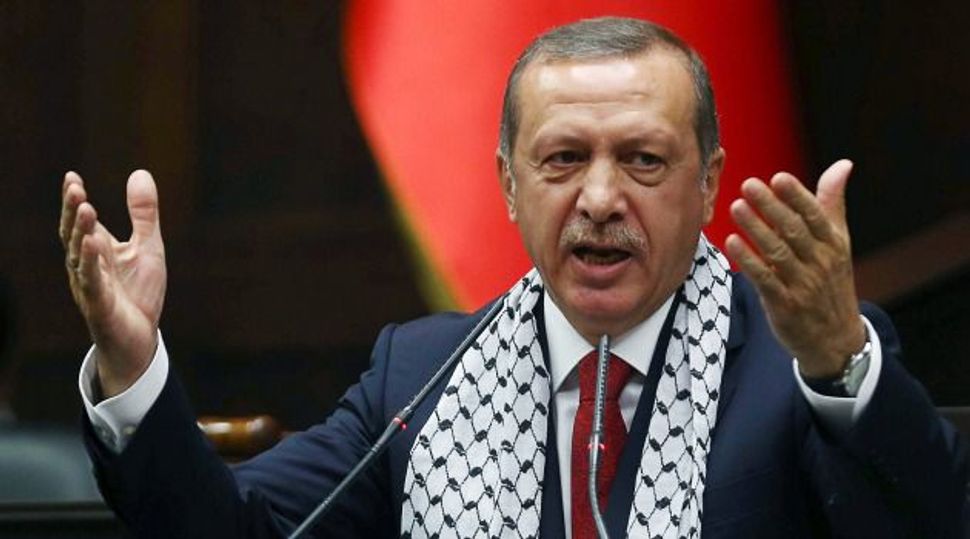 An association of Jewish Americans said Turkish Prime Minister Tayyip Erdogan has become the world’s “most virulent anti-Israeli leader” and demanded he return an award it gave him a decade ago, partly for his efforts to broker peace between Israel and Palestinians.

The New York-based American Jewish Congress awarded Erdogan its “Profile of Courage” award in 2004 for what it said was his stance on fighting terrorism and working towards a peace.

“Now, we want it back,” the association’s president, Jack Rosen, said in an open letter to Erdogan dated July 23 and made public on Thursday. He cited the Turkish leader’s comments last weekend that Israel had “surpassed Hitler in barbarism” through its attacks on Gaza.

“A decade after we gave you our award, you have become arguably the most virulent anti-Israel leader in the world – spewing dangerous rhetoric for political gain and inciting the Turkish population to violence against the Jewish people.”

Anti-Israeli sentiment runs high in Turkey, and Erdogan’s rhetoric plays well with his base of largely conservative Sunni Muslim voters, who he hopes will hand him victory in Turkey’s first direct election of a president next month.

There is widespread anger in Turkey at Israel’s offensive in Gaza, where the death toll reached 747 on Thursday after Israeli forces shelled a U.N.-run school, killing at least 15 people.

Israel, which says it has a right to defend itself, has lost at least 32 soldiers in clashes inside Gaza and with Hamas raiders who have slipped under the fortified frontier in tunnels. Palestinian rockets and mortar bombs have killed three civilians in Israel.

Israel said last week it was reducing its diplomatic presence in Turkey after protesters pelted its consulate in Istanbul with stones and draped Palestinian flags on the ambassador’s residence in Ankara.

The U.S. State Department called Erdogan’s earlier remarks, in which he likened an Israeli MP to Hitler and said the Jewish state was terrorizing the region, “offensive and wrong”.

Turkey, a member of the U.S.-led NATO military alliance, was once Israel’s closest regional ally. Washington considered it a credible broker in the Middle East peace process.

Rosen said Erdogan had forfeited Turkey’s seat “at the table of legitimate mediators” and that all parties would have been better off had he remained a “proponent of peace”.

Erdogan has made no apology for his stance, criticizing the West and Arab nations and acknowledging in a television interview on Monday that he no longer spoke with U.S. President Barack Obama as frequently as in the past.