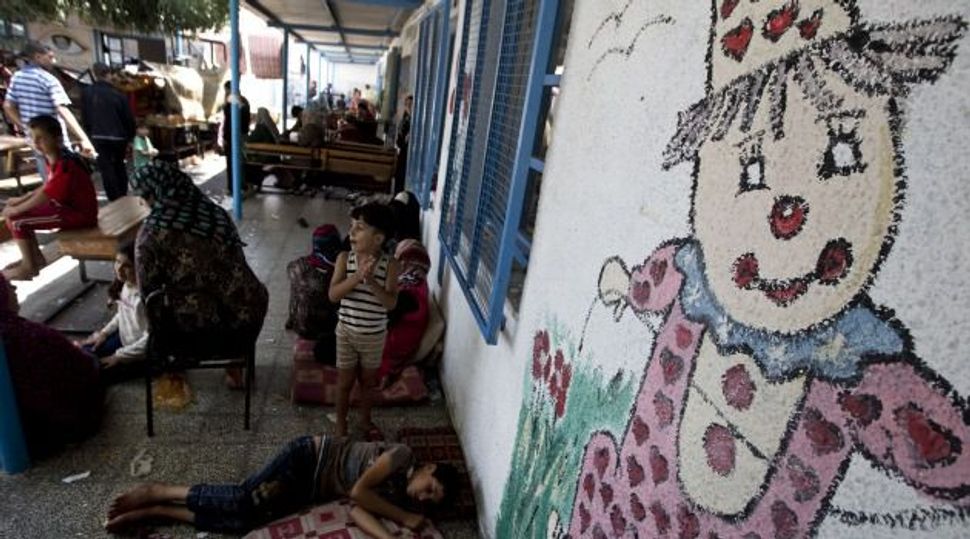 United Nations officials had told the Israeli military 17 times that a school in Gaza’s biggest refugee camp was a shelter for Palestinian civilians fleeing fighting in the teeming coastal strip, but it was not enough to save them from deadly shelling.

Blown to pieces as they huddled asleep on mattresses on classroom floors, at least 15 men, women and children were killed and more than 100 wounded when Israeli artillery fire struck Jabalya Girls Elementary School on Wednesday, U.N. officials said.

The victims had fled their homes in other battle zones hoping they would be safe under the blue-and-white U.N. flag.

Abdel-Karim al-Masamha, 27, said he and his family had come to the school after fleeing fighting near their home in the northern Gaza Strip.

“We did not find safety here,” he said. “People were martyred before our eyes. They were dismembered.”

The Gaza Health Ministry said at least 15 people were killed at the school, where survivors gathered pieces of flesh for burial. The head of the United Nations Relief and Works Agency (UNRWA) said it was premature to issue an official death toll.

The Israeli army said militants near the building had fired mortar bombs and Israeli forces had shot back. “We’re still reviewing the incident,” a military spokeswoman said.

But UNRWA chief Pierre Krahenbuhl said the agency had given the school’s precise location to the Israeli military 17 times, with the last notification made just hours before the shelling.

“I condemn in the strongest possible terms this serious violation of international law by Israeli forces,” he said in a statement.

At the edge of the schoolyard, some 20 donkeys lay dead, still tied to a railing.

Jabalya, which has been under Israeli fire for the past 24 hours, is the largest refugee camp in the Gaza Strip. Its population of 120,000 has been swollen by Palestinians trying to escape fighting between Israel and militant groups in the 23-day-old conflict.

“There is no safety at all, no place is safe, neither homes nor schools,” said Haleema Ghabin, holding her infant son at the school. “What shall I say to the world? Find us a solution, we are defenseless civilians and children.”

Khalil al-Halabi, director of UNRWA’s northern Gaza operations, said some 3,000 Palestinians were taking refuge in the school when it came under fire.

“There were five shells – Israeli tank shells – which struck the people and killed many of them as they slept. Those people came to the school because it is a designated U.N. shelter,” he said.

Israel says Hamas, the dominant movement in the Gaza Strip, ultimately bears responsibility for civilian deaths because the group’s fighters operate in residential areas and use non-combatants as human shields.

In leaflets dropped over Gaza on Wednesday, the Israeli military cautioned residents: “For your safety, stay away from terrorist elements which carry out terror activities.”

The message included telephone numbers and email addresses civilians could use to convey information about “rocket launchers, tunnels, ammunition depots and places where terrorist elements exist in your area”.

UNRWA, the main U.N. relief agency in Gaza, said it was at “breaking point” with more than 200,000 Palestinians sheltering in its buildings following calls by Israel for civilians to evacuate whole neighborhoods before military operations.

Last Thursday, 15 Palestinians were killed and 200 injured in a strike on a U.N. school in the northern Gaza town of Beit Hanoun, crowded with hundreds of displaced civilians.

U.N. Secretary-General Ban Ki-moon condemned that attack and said he was appalled by the bombardment of a U.N.-designated shelter. The Israeli military said militants had fired from the vicinity of the school in Beit Hanoun and soldiers shot back.

Last week, Ban also expressed alarm at the discovery of rockets at two UNRWA schools. On Tuesday, rockets were found at a third, and a spokesman for the agency condemned “the group or groups who endangered civilians” by placing munitions there.