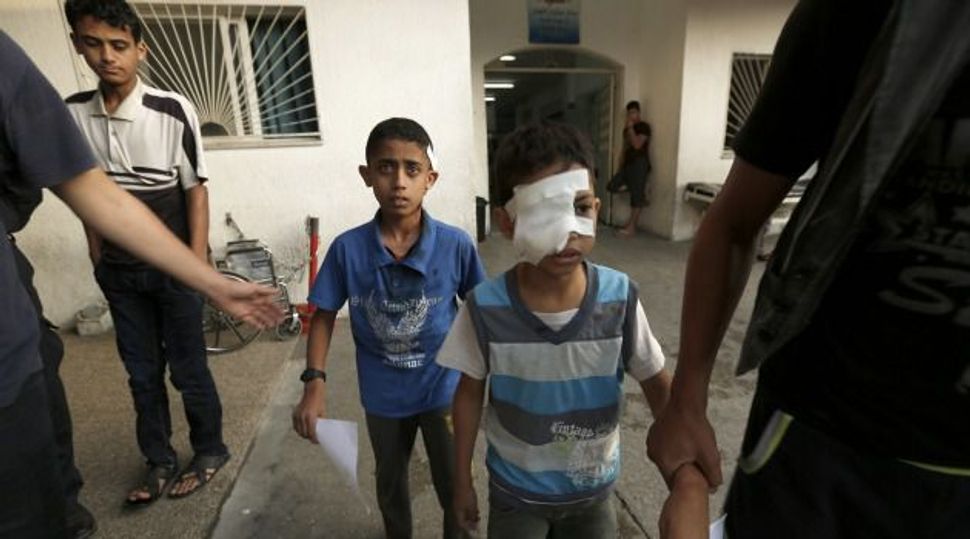 Israeli Prime Minister Benjamin Netanyahu, facing international alarm over a rising civilian death toll in Gaza, said on Thursday he would not accept any ceasefire that stopped Israel completing the destruction of militants’ infiltration tunnels.

The Israeli military estimated on Wednesday that accomplishing that task, already into its fourth week, would take several more days.

“We are determined to complete this mission, with or without a ceasefire,” Netanyahu said in public remarks at the start of a meeting of his full cabinet in Tel Aviv.

“I wont agree to any proposal that will not enable the Israeli military to finish this important task, for the sake of Israel’s security.”

Leaving open the option of widening a ground campaign in the Hamas Islamist-dominated Gaza Strip, the Israeli military said it had called up an additional 16,000 reservists. A military source said they would relieve a similar number of reserve soldiers being stood down.

Netanyahu’s security cabinet on Wednesday approved continuing operations launched on July 8 in response to a surge of cross-border rocket attacks. Israel also sent a delegation to Egypt, which has been trying, with U.S. blessing, to broker a ceasefire.

Washington has also, however, allowed Israel to tap a local U.S. arms stockpile in the past few weeks to replenish its grenades and mortar rounds, a U.S. defense official said on Thursday.

U.N. Secretary-General Ban Ki-moon strongly condemned on Wednesday the deaths of at least 15 Palestinians among thousands sheltering at a U.N.-run school. The United Nations said its initial assessment was that Israeli artillery shells hit the facility.

“It is outrageous. It is unjustifiable. And it demands accountability and justice,” Ban said.

Israel said its forces were attacked by guerrillas near the school, in northern Jabalya, and had fired back. In another incident on Wednesday, 17 people were killed in nearby Shejaia by what Palestinian officials said was Israeli shelling of a produce market. The Israeli military said it was investigating.

“Such a massacre requires an earthquake-like response,” said Hamas spokesman Fawzi Barhoum, whose group has kept up dozens of daily rocket launches deep into Israel. The Israelis have kept casualties from the salvoes low, using its Iron Dome air defense system to intercept them and air-raid sirens to send people to shelters.

In the northern Gaza town of Beit Lahiya on Wednesday, Israeli tank shells landed near another U.N.-run school and at least 30 people sheltering inside were wounded by shrapnel and shattered glass, witnesses and hospital officials said.

Rolling Israeli ground assaults on residential areas, preceded by mass warnings to evacuate, have displaced more than 200,000 of Gaza’s 1.8 million Palestinians. The tiny territory’s infrastructure is in ruins, with power and water outages.

Israel says it is trying to avoid civilian casualties and blames these on Hamas and other Palestinian factions dug in for urban combat.

Both sides have voiced openness to a truce, but their terms diverge dramatically. Israel wants Gaza stripped of infiltration tunnels and rocket stocks. Hamas rules that out, and seeks an end to a crippling Gaza blockade enforced by Israel and Egypt, which view the Palestinian Islamists as a security threat.

Major General Sami Turgeman, chief of Israeli forces in Gaza, said on Wednesday they were “but a few days away from destroying all the attack tunnels”. The army said 32 of the secret passages had been found so far and half of them blown up.

Diplomacy to end the Gaza conflict is further complicated by the fact Israel and the United States shun Hamas as a terrorist group, while the go-betweens – Egypt, Qatar and Turkey – disagree on Gaza policy.

Amos Gilad, a senior Israeli defense official involved in talks with Cairo, said Egypt wanted the fighting to stop before any wider negotiations on a long-term arrangement to prevent future flare-ups.

“The Egyptians don’t want to discuss anything with anyone while violence and terror continue,” he told Israel Radio.

In the absence of a deal, Israel has ordered its ground forces to focus on locating and destroying a warren of tunnels through which Hamas has menaced its southern towns and army bases.

“Progress has been satisfactory, and we are completing our treatment of the terror tunnels,” Defense Minister Moshe Yaalon said on Thursday. “During the fighting, soldiers are finding new tunnel shafts, and they are also being neutralized.”

Three Israeli soldiers were killed on Wednesday by a booby trap detonated as they uncovered a tunnel shaft, the army said. Military losses are more than five times those from the last Gaza ground war, in 2008-2009, but Israeli opinion polls show strong public support for fighting on until Hamas is quelled.

Netanyahu faces intense pressure from abroad to stand his forces down. The United States and the U.N. Security Council have urged an immediate, unconditional ceasefire by both sides in Gaza to allow in humanitarian relief and for further talks on a more durable cessation of hostilities.

On Wednesday, the White House voiced worry at the deaths in Jabalya and other U.N.-run shelters shelled during the clashes.

“We are extremely concerned that thousands of internally displaced Palestinians who have been called on by the Israeli military to evacuate their homes are not safe in U.N.-designated shelters in Gaza,” said National Security Council spokeswoman Bernadette Meehan.

“We also condemn those responsible for hiding weapons in United Nations facilities in Gaza,” she said, referring to three cases in which the UNRWA aid agency reported rockets found at its schools.

Israel briefly observed a July 15 ceasefire proposed by Egypt, but Hamas continued attacks, saying its conditions had been ignored. Egyptian officials say they put together a revised truce plan this week that had been provisionally accepted by Israel, though Hamas was still undecided.