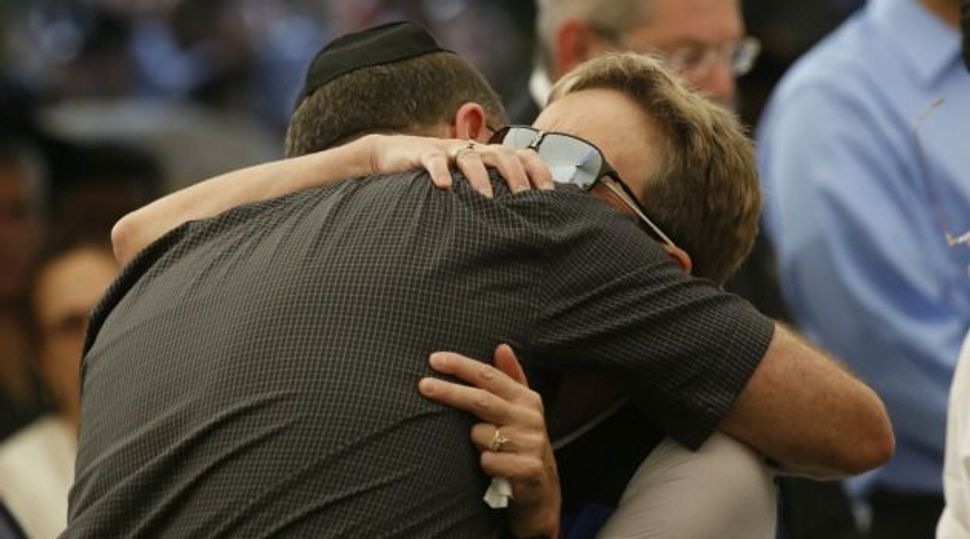 Thousands of mourners attended the funeral of Lt. Hadar Goldin, the soldier who was declared dead after first being feared kidnapped.

Friends and family of Goldin, along with ordinary Israelis, converged on the military cemetery in Kfar Saba, in central Israel, for the rite on Sunday afternoon.

“I didn’t expect you to leave me so quickly,” Goldin’s fiancee, Edna Sarusi, said in a eulogy.

She told the mourners that Goldin was very easy going when planning their wedding, saying, “All I want Edna is that you be a bride.”

“I so wanted to be your bride, Hadar,” she said.

The Israel Defense Forces had announced early that morning that Goldin was killed in action, saying its determination was based on an analysis of what took place on the battlefield, a medical review, Jewish legal considerations and other considerations. Though his body was not recovered, partial remains were buried at the cemetery.

Goldin’s twin brother, Tzur, also spoke at the funeral. The brothers had served at the same time as combat soldiers and trained together as officers.

“We were two that lived together and will never be divided,” Tzur Goldin said. “Your life is mine and mine is yours.”

Defense Minister Moshe Yaalon, who announced in a tweet earlier Monday that he was related to Goldin and had known him his whole life, attended the funeral but did not speak.

Israeli Prime Minister Benjamin Netanyahu spoke with the soldier’s parents, Simcha and Leah Goldin, prior to the funeral. “Hadar was a tremendous personality, a great hero. I know that you are going through terrible agony, the feeling that a part of you has been taken away and you are no longer whole,” Netanayhu said, according to a statement from his office.

“This is pain that has no relief, not even for a moment.

“I hope that you will find consolation in the fact that he fell to uphold the people of Israel in the struggle for our independence.”