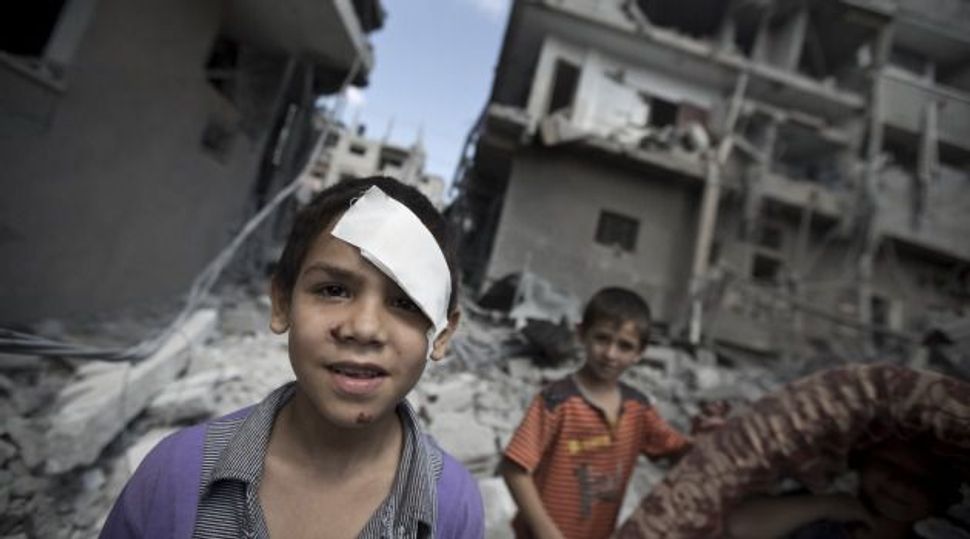 Israel launched more than 30 air attacks in Gaza on Saturday, killing nine Palestinians, and militants fired rockets at Israel as the conflict entered a second month, defying international efforts to revive a ceasefire.

The violence seemed at risk of jeopardizing talks brokered by Egypt aimed at securing a permanent truce.

The Palestinian delegation in Cairo threatened to walk out on Sunday unless Israel showed up. Previously, an Israeli official who asked not to be named said Israel had no plans to send negotiators back to Cairo “as long as the shooting goes on”.

Medical officials in Gaza said two Palestinians were killed when their motorcycle was bombed, and the bodies of three others were found beneath the rubble of one of three bombed mosques.

Two Palestinians were killed in an air strike on a car in the southern town of Rafah, Gaza medics said. A 13-year-old girl and a man were killed in other air assaults, hospital officials said.

An Israeli military statement said four of the Palestinians targeted on Saturday were Hamas militants.

Another attack reduced a security complex belonging to Hamas to a huge cloud of smoke, but there were no casualties. Elsewhere, three houses were bombed, and fighter planes strafed open areas, officials said.

The Israeli military said that since midnight it had struck more than 30 sites in the coastal enclave, without specifying the targets. Gaza militants fired 30 rockets into southern Israel on Saturday, setting off sirens but causing no damage, the military said.

Since the end of a 72-hour truce on Friday, Gaza militants have fired more than 100 rockets at Israel, military officials said. Two Israelis were hurt by a mortar attack on Friday.

Israeli air strikes killed five Palestinians on Friday, among them a 10-year-old boy near a mosque in Gaza City.

Egypt, backed by American and European mediators, has made no visible progress towards restoring the ceasefire that had halted fighting for three days.

There was no sign of diplomatic progress in Egypt on Saturday. The head of the Palestinian delegation, Azzam Ahmed said “we will leave Cairo tomorrow if it is confirmed to us that they (Israelis) will not return” unconditionally.

Both sides were far apart on the terms for renewing the ceasefire. Each side blamed the other for not having extended the three-day truce that expired on Friday.

A sticking point was Israel’s demand for guarantees that Hamas would not use any reconstruction supplies sent to Gaza to construct more tunnels of the sort that Palestinian fighters have used to infiltrate Israel.

“We are at a crossroads and within two or three days we will see whether we are heading left toward an agreement, or right, toward escalation,” Israeli Intelligence Minister Yuval Steinitz told Channel Ten television.

Egypt is meeting separately with each party. Israel and Hamas deny each other’s legitimacy, with Hamas rejecting Israel’s right to exist and Israel rejecting Hamas as a terrorist organization.

However, about 150 demonstrators defied the ban and gathered at the protest, police said.

By resuming attacks against Israel, Gaza militants appeared to be trying to ramp up pressure and making it clear they were ready to fight on to fulfill a goal of ending a blockade of the territory that both Israel and Egypt have imposed.

Heavy civilian casualties and destruction during Israel’s campaign in packed residential areas of the Gaza Strip have raised international alarm over the past month.

Gaza officials say the war has killed 1,890 Palestinians, most of them civilians. Israel says 64 of its soldiers and three civilians have died in the fighting that started on July 8 following a surge in Palestinian rocket salvoes into Israel.

Israel expanded its air and naval bombardment into a ground offensive on July 17, and pulled its infantry and armor out of the enclave on Tuesday after saying it had destroyed more than 30 infiltration tunnels dug by militants.

The White House has urged Israel and the Palestinians to do what they can to preserve civilians after having failed to extend their ceasefire, while U.N. Secretary-General Ban Ki-moon has warned that any further fighting would “exacerbate the already appalling humanitarian situation in Gaza”.

“They condemned the resumption of rocket fire and called for an immediate cessation of hostilities leading to a sustainable ceasefire,” the White House said in a statement about a call between the two leaders.

“President Obama and Prime Minister Cameron reiterated support for Israel’s right to self-defense while emphasizing the need for all sides to minimize civilian casualties.”

At a rally in South Africa, Nobel laureate Desmond Tutu accused Israel of behaving like a “barbaric bully” in Gaza.

Israel said ahead of the truce’s expiration on Friday it was ready to agree to an extension. Hamas did not agree.

Hamas spokesman Sami Abu Zuhri said Israel had rejected most of the group’s demands. The Palestinians want Israel to agree in principle to lift the blockade, release prisoners and permit the opening of a sea port.

“There is no going back and the resistance will continue … there is no retreat from any of our demands,” Abu Zuhri said.

Israel has resisted easing access to Gaza, suspecting Hamas could restock with weapons from abroad.

Israeli Justice Minister Tzipi Livni, a member of Prime Minister Benjamin Netanyahu’s security cabinet, said the issue of a sea port should be part of wider peace negotiations with the Palestinians and that Hamas should not at this time be rewarded for “using force against Israeli citizens”.

In related violence, a Palestinian man died a day after being shot by Israeli troops confronting a protest in Hebron. Israeli gunfire had killed another Palestinian protester in the occupied West Bank on Friday, medical officials said.