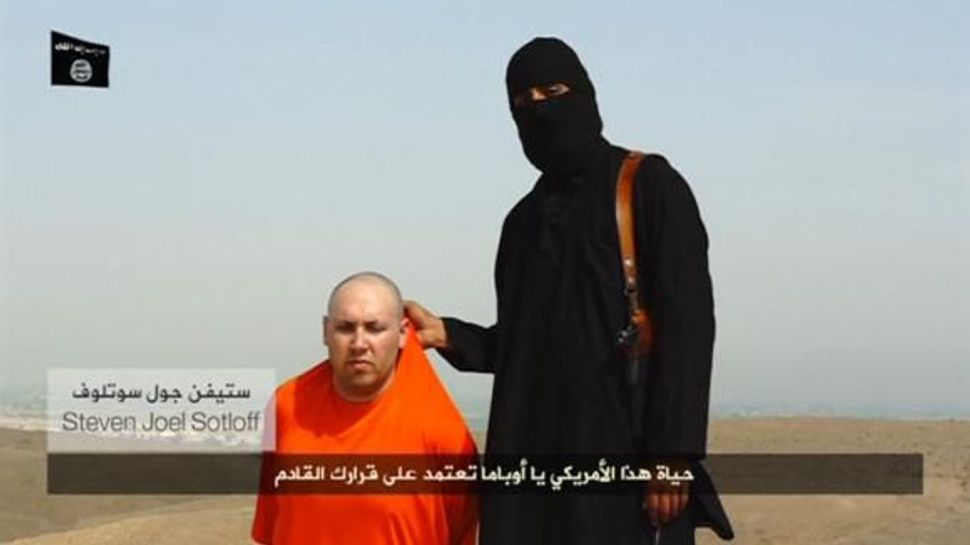 A masked Islamic State militant speaks next to a man purported to be U.S. journalist Steven Sotloff at an unknown location in this still image from an undated video posted on a social media website. Image by Reuters

A masked figure in the video also issued a threat against a British hostage, a man the group named as David Haines, and warned governments to back off “this evil alliance of America against the Islamic State,” the monitoring service said.

Secretary of State John Kerry, in a meeting with Jewish leaders, reportedly stated that he had seen the video purporting to show Sotloff’s beheading, a source told the Forward.

Sotloff, a freelance journalist, was kidnapped in Syria in August 2013. Sotloff’s mother Shirley appealed on Aug. 27 in a videotaped message to Islamic State’s self-proclaimed caliph, Abu Bakr al-Baghdadi, for her son’s release.

On Aug 19 the group published a video showing the beheading of U.S. hostage James Foley. The group said his death was in retaliation for U.S. airstrikes on fighters in Iraq.

That video was issued after the United States resumed air strikes in Iraq in August for the first time since the end of the U.S. occupation in 2011.