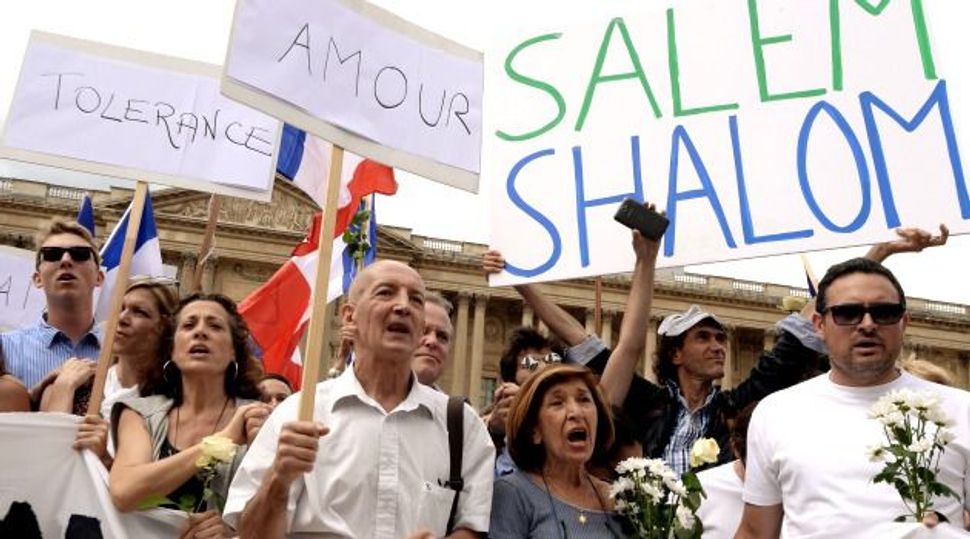 Jewish and Muslim demonstrators advocate peace at a rally in Paris. Image by Getty Images

The CRIF umbrella group of French Jewish communities condemned and called for an investigation into an assault, reportedly by Jews, of two teenagers.

The assault against the two, both in their late teens and reportedly of Arab background, took place on Sunday in Saint Mande, Le Parisien reported. According to the report, approximately 30 young men and teenagers from the Jewish community confronted the teenagers, who were delivering groceries in the area, because two of them appeared Arab.

“CRIF firmly condemns the violence,” the group wrote on its website Wednesday. “It is unacceptable, as were the racist insults leveled [at the victims]. CRIF calls for a comprehensive investigation of the events, which should not recur in our society.”

Quoting the victims, Le Parisien reported the alleged aggressors called the assaulted teens and a third non-Arab teenager, a friend of the two involved in the incident, “dirty Arabs.”

The two teens sustained light injuries in a fist fight, according to L’Express, and three of the Jewish aggressors were detained but released shortly thereafter for lack of evidence.

While confirming that two of the victims were Arab and the alleged aggressors Jewish, L’Express quoted several sources who said the fight may have developed over a subject that was unrelated to the religious or ethnic affiliations of the parties involved.

The mother of one of the three non-Jewish teenagers, who was not named, told the daily: “This is something that happened between teenagers and it would be appalling to tie it to inter-communal tensions.”

Amid a rise in anti-Semitic violence and incidents in France, reprisals by young Jews, including members of the French homologue of the Jewish Defense League, the LDJ, against suspected perpetrators have multiplied.