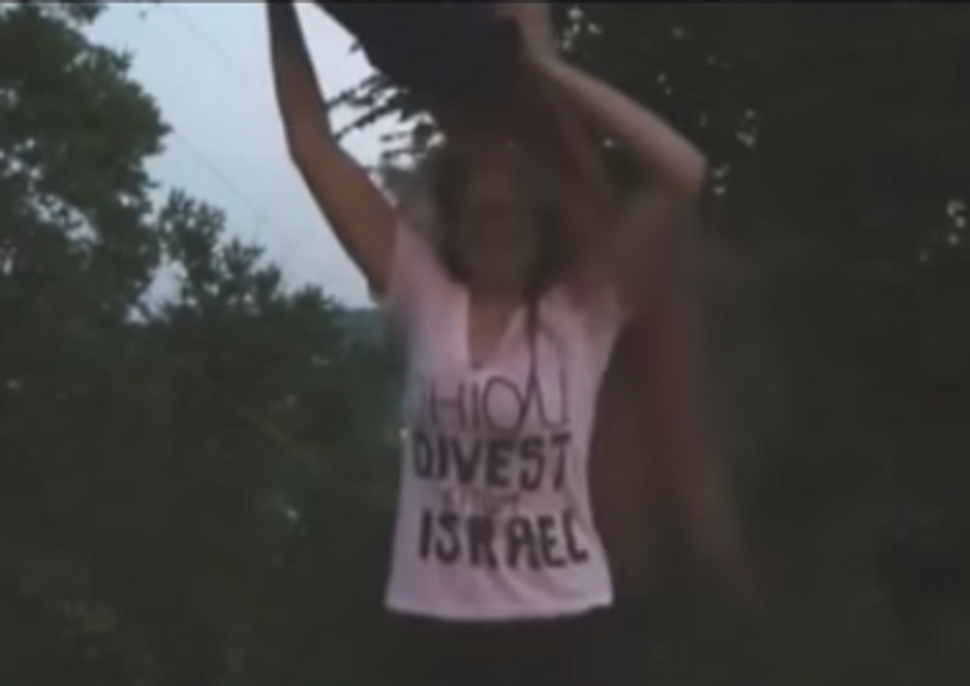 Pro-Israel students staged a filibuster during Wednesday night’s meeting of the Ohio University Student Senate. The students called for the resignation of Student Senate President Megan Marzec over a recently recorded video in which Marzec poured a bucket of “blood” (red-colored water) over her head to support the Boycott Divestment and Sanctions movement against Israel.

Marzec’s video, posted on September 2 in response to an ALS ice bucket challenge issued by the university president, has sparked widespread controversy both on the campus and off. In her video, Marzec spoke in her capacity as student senate president and accused Israel of “genocide in Gaza.” The OU Student Senate Twitter account subsequently apologized for the video.

The video has been criticized both for its critique of Israel and for Marzec’s divisive stance as a student body leader. Others praised her for speaking her beliefs, and Marzec reported receiving hostile messages and death threats.

The student senate protest began at the start of the session, led by Rebecca Sebo, President of Bobcats for Israel, who rose to speak, denouncing recent threats made against Marzec but nonetheless calling on Marzec to resign. After roughly three minutes, according to the student paper, the Post Athens, Marzec called on Sebo to stop speaking so that students could speak in an orderly fashion, but she and other protesters continued to speak.

The meeting then became increasingly chaotic. Marzec shouted for order and threatened to have protesters arrested; other students and adults at the meeting clapped and chanted over the protesters, with some denouncing them as “fascists” Rabbi Danielle Leshaw, the executive director of Hillel at Ohio University, and who attended the meeting, said that the atmosphere became “explosive.”

Finally, Marzec issued a vote to have the protesters arrested for disrupting the meeting. Ohio University police issued the protesters a two-minute warning, and then arrested them and led them from the meeting. The students were led from the room, charged at the police station with disruption of a lawful meeting, and released. On Thursday morning, their court date was set for the morning of September 24th, the day before Rosh Hashana.

Leshaw said that although she didn’t think the protesters should have been arrested, she said the police “acted beautifully” and that their presence helped prevent a hostile situation from spiraling out of control.

“I think it was actually a blessing that the police arrived,” she told JTA.

Marzec was defiant in response to the protest. According to the Post Athens, she stood on a table after the arrests and declared that she would “never apologize for the people of Palestine.”

She added, “And I will never stand up for fascists. And this body won’t either.”