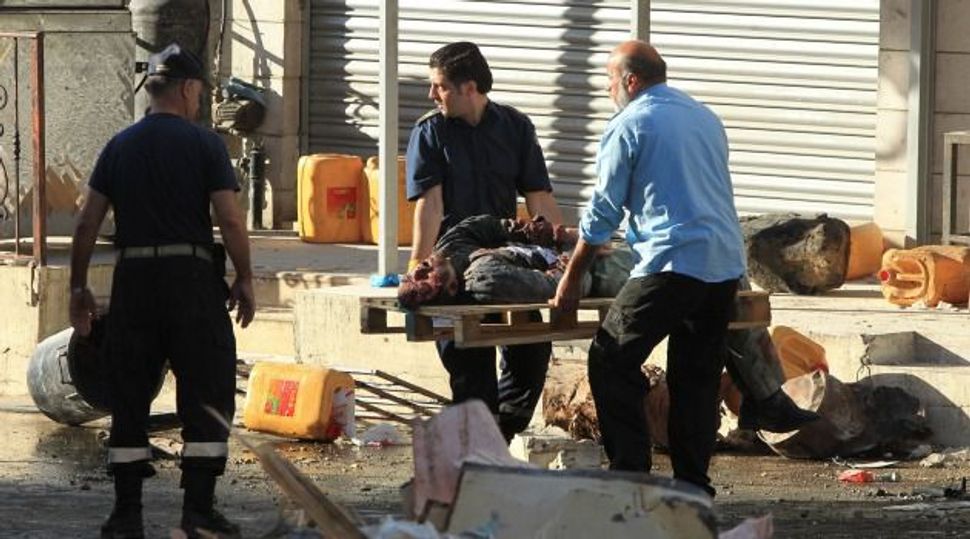 The two Palestinian men suspected of kidnapping and killing three Israeli teens were killed in a firefight with Israeli troops during an operation to apprehend them.

Marwan Kawasme and Omar Abu Aysha were killed early Tuesday morning in Hebron, where Israeli troops had surrounded the house that they were hiding in, more than three months after the search for the suspects began.

Three other Palestinians suspected of involvement in the kidnapping, all of them members of the Kawasme family, also were arrested during the operation.

Gilad Shaar, Eyal Yifrach and Naftali Fraenkel, a dual Israeli-American citizen, were abducted from a juncti0n in the Gush Etzion settlement bloc south of Jerusalem on July 12. The bodies of the three teens were discovered June 30 in a shallow grave in a field near Hebron, 18 days after they went missing, following a massive search.

Abu Aysha, a 32-year-old locksmith, was last seen at a family gathering only hours before the kidnapping, reportedly leaving abruptly without telling anyone where he was going. Abu Aysha’s brother, also a Hamas member, was killed in November 2005 while attempting to hurl an explosive device at IDF soldiers during a clash in Hebron, according to the IDF. Israeli authorities also arrested his father several times for a range of terror activities, the IDF said.

Kawasme, a 29-year-old barber, has been detained by the Palestinian Authority and by Israel in the past for his activities with Hamas, and his family is known to have ties to Hamas. The money to buy the car and guns used in the abduction was procured from Hamas through his brother Mohamad. Another brother, Hussam Kawasme, is already in Israel’s custody; he helped bury the bodies and hide the suspects.

“We promised the families that we would find the murderers. This morning, we did just that,” event, IDF Chief of Staff, Lt. Gen. Benny Gantz, said Tuesday morning. “This isn’t a consolation for the grieving families but I hope that knowing we reached their children’s murderers may slightly comfort them.”

“We are proud of you and our people will not forget your jihad,” Hussam Bardan, a Hamas spokesman, said in a statement reportedly circulating on social media.

Prime Minister Netanyahu said Tuesday morning that he had spoken earlier with the parents of the three teens. “With the advent of the New Year, nothing can assuage their pain and nothing can bring back their wonderful, dear boys. But I told them that justice has been done and that we had carried out the mission that we promised to them and all of Israel.”

He added: “We said from the outset that Hamas was responsible for the abduction and murder and in light of the proof we have accumulated Hamas admitted that it was behind this terrorist attack.”

Rachel Fraenkel, mother of 16-year-old Naftali, told the New York Times that her other six children cheered when she told them of the deaths of the suspected kidnappers, but that she had “no emotional reaction.”

“My kids are happy that the bad guys are gone,” Rachel Fraenkel told the newspaper. “We were worried about these two dangerous people, with weapons, having nothing to lose being out there. It’s a relief to know that they won’t hurt any other innocent people.”