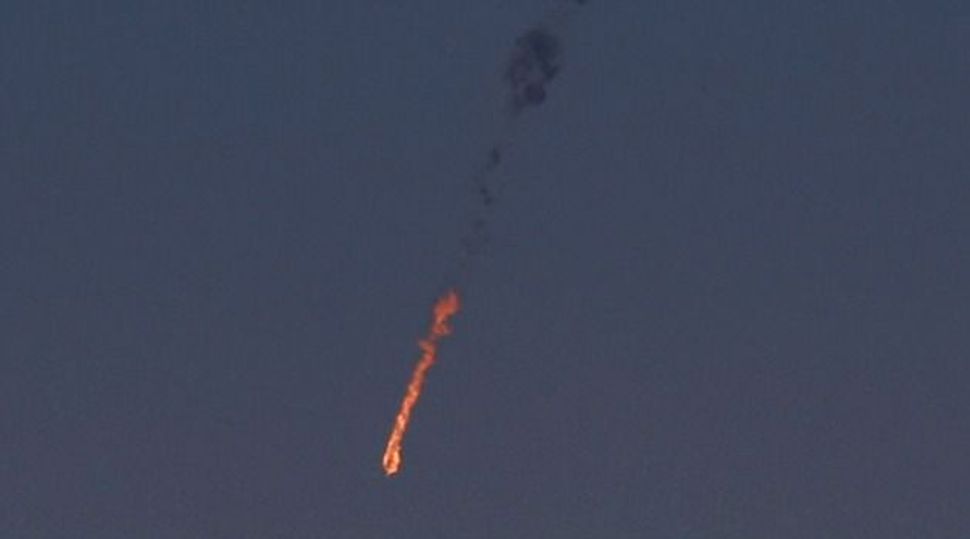 The Israel Air Force shot down a Syrian warplane that infiltrated Israeli airspace.

The plane crossed the border Tuesday morning. The Israel Air Force fired a Patriot anti-aircraft missile at the warplane, hitting it and shooting it down, according to the IDF.

The breach of Israel’s border with Syria “is a continuation of the growing tension this border has experienced in recent months,” the Israel Defense Forces said.

Israeli Defense Minister Moshe Yaalon said Tuesday that the Syrian warplane had “approached Israeli territory in the Golan Heights in a threatening manner, and even crossed the border.”

Israel “has made it clear in the past, and is reiterating now: We will not allow anyone, neither state nor terror organization, to threaten our security and to violate our sovereignty,” Yaalon also said, according to the Jerusalem Post.

Rockets and gunfire from Syria have crossed into the Israeli Golan Heights in recent months, spillover from the more than three-year civil war which has seen fierce battles recently between rebels and the Syrian army on the border between Israel and Syria.

Downing the airplane is the first such incident since Israel’s war with Lebanon in 1982, according to reports. The IDF shot down two Syrian MiG-23s that approached them in 1985 over Lebanon.

Syrian state television reportedly confirmed the hit on the plane, which fell near Quneitra on the Israel-Syrian border, the only official crossing between the two countries. The downing of the plane was “in the framework of (Israel’s) support for the terrorist Islamic State and the Nusra Front,” a rebel group linked to al-Qaida, Syrian state television reported, according to Reuters.

The crew reportedly ejected from the plane and landed in Syrian territory.

The incident occurred hours after the start of U.S.-backed airstrikes on ISIS in Syria. The U.S. was joined in the airstrikes or supported by five Arab countries: Saudi Arabia, the United Arab Emirates, Qatar, Bahrain and Jordan.