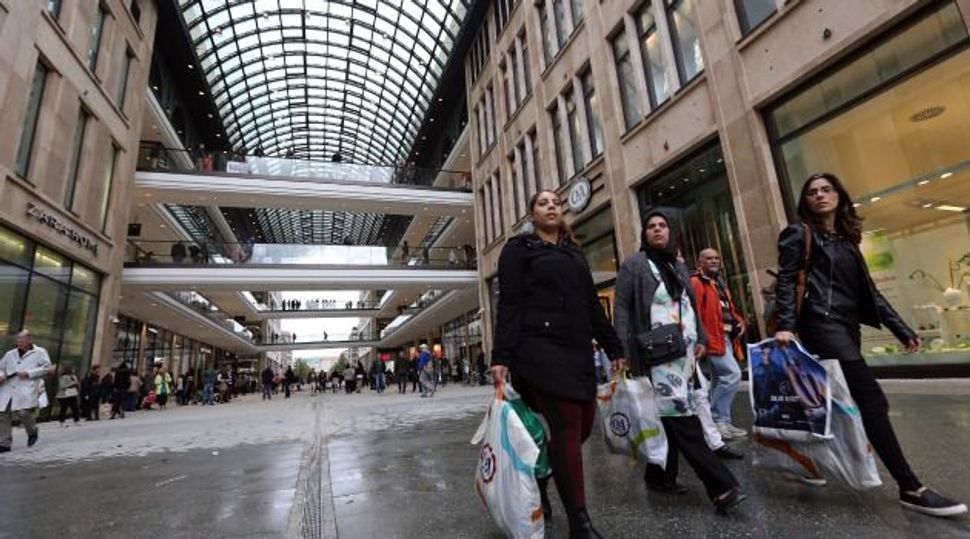 A gigantic German department store, rebuilt in the heart of Berlin on the rubble of a shopping centre seized by the Nazis, was opened on Thursday with a ceremony paying tribute to its original Jewish owners.

The near 1 billion euro ($1.3 billion) “Mall of Berlin” – an entire quarter with a glass-covered arcade, 270 shops, a hotel and flats – marks the spot where the Wertheim store was built in 1896.

When Hitler’s Nazis expropriated it in 1937, it was pre-war Europe’s most famous shopping centre.

“It’s really great that, after the war and 25 years after the fall of the Berlin Wall, we’ve finally managed to close the gap where the great Wertheim store once stood,” Berlin Mayor Klaus Wowereit told some 10,000 people at the opening ceremony.

“The Leipzig platz square has a historic importance in Berlin. Wertheim stood for quality and innovation and we’re looking forward to continuing that tradition.”

The mall stands just east of where the Berlin Wall divided the city during the Cold War and just a few dozen metres south of where Hitler had his bunker. The Wertheim store was badly damaged by Allied bombs during World War Two and razed by Communist East Germany in 1956.

It was a wasteland in the no-man’s land near the wall until 1989 but the area soon sprang to life after German unification.

One of the world’s most famous techno clubs, “Tresor”, was opened in 1991 in the only remnant left of the Wertheim store, its giant underground vault. The club closed in 2005.

The original Wertheim property was Europe’s biggest shopping centre when it opened near the end of the 19th century. It had 106,000 square meters (1.14 million square feet) of floor space and set new standards for the city, Germany and all of Europe.

In 1937, the Nazi’s “Aryanisation” rules forced the Wertheims to sell their holdings. After the war ended, the property became embroiled in a lengthy legal dispute between the family’s descendants and several German companies. The dispute was finally settled out of court in 2007.

Harald Huth, developer of the three-storey structure, paid tribute to the Wertheim store by including giant pictures of the original store on the walls of the mall and modelling the glass-covered arcade on the original building.

“It’s fantastic that we’re able to reanimate such a historic spot in Berlin,” Huth told the grand opening reception.