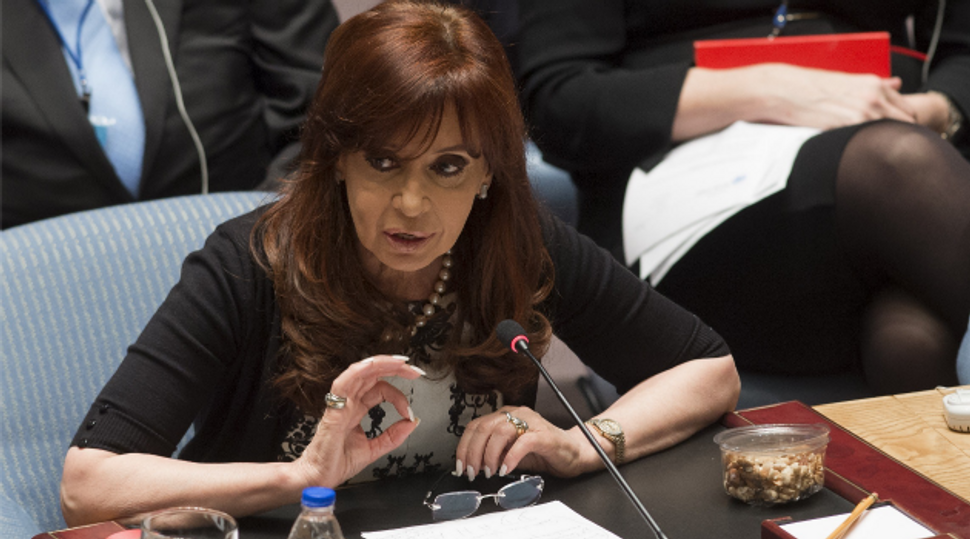 Jewish leaders in Argentina on Monday responded to Cristina Fernandez’s public criticism of Argentinean Jewish leaders in her U.N speech on the first day of Rosh Hashanah for not supporting the pact with Iran in order to jointly investigate the 1994 AMIA bombing attack.

Argentinean Jewish leaders were unable to respond to Fernandez’ accusations until after Rosh Hashanah.

“We feel hurt and worried. It was very surprising how she tried to make the Jewish community responsible for the failure of the case,” Julio Schlosser, president of DAIA, the country’s Jewish political umbrella, told local media.

“The Jewish institutions that always support us, they turned against us,” Fernandez told the General Assembly. “We asked Iran to cooperate with the Argentinian Justice Ministry several times. Then we signed a Memorandum of Understanding which is a tool to cooperate. We want the Iranians to declare the facts to the judge. When we signed the agreement it seemed that the internal and external demons were unleashed. Jewish institutions who had accompanied us turned against us. When we decided to cooperate they accused us of complicity with the State of Iran.”

Fernandez pointed out that when representatives of the U.S. government met with Iranian leaders there was no similar outcry.

“From Day One we´ve always said that the Republic of Iran, or the terrorist state of Iran, is not a valid partner since they are not trustworthy in any memorandum that seeks the truth. She (Fernandez) tried to turn victims into victimizers. We were victims of terrorism. We are the victims of the only demon which is the Islamic Republic of Iran,” Schlosser said.

Early this year an Argentine federal court declared the pact with Iran to be unconstitutional.