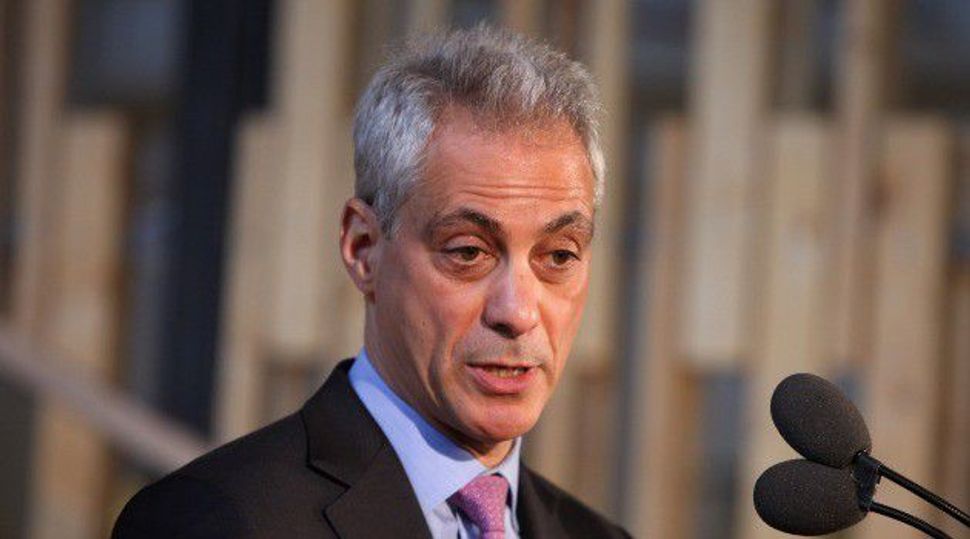 Rahm Emanuel won election as mayor of Chicago three years ago in part because of his strength in the African-American community, but enough black voters have since soured on him that a black labor leader is emerging as a potential rival in the city’s February election.

Emanuel easily won the majority of voters in every African-American ward in 2011 to become mayor of Chicago, the nation’s third-largest city. Since then, a persistently high murder rate, the closing of 50 public schools and a sense that Emanuel is out of touch have hurt his position and invited a bid from Karen Lewis, president of Chicago’s teachers’ union.

Any candidate for mayor other than Emanuel, who served at President Barack Obama’s first chief of staff, would start with a financial disadvantage. The mayor has taken advantage of his popularity with the city’s business community and his national profile to raise more than $8 million in campaign funds.

Lewis, who has not yet committed to a run, has less than $60,000, including $40,000 of her own money. A national teachers’ union has pledged $1 million if she decides to challenge Emanuel.

Support for Emanuel among black Chicagoans, a third of the city’s population, has fallen sharply, according to recent polls. About one in four black voters now approves of Emanuel’s performance, according to a Chicago Tribune poll released in mid-August. In May 2013, forty percent of black voters approved of the mayor’s job performance, the Tribune said.

Citywide, 35 percent of voters approve of his job performance.

“He came in here with the Obama halo, and it was assumed his policies would reflect those of the president,” Lewis said in an interview.

In the same Tribune poll, 46 percent of black voters considered Lewis favorably, while results showed she would narrowly best Emanuel in a city-wide race.

Lewis rose to prominence in Chicago politics in 2012 when she led the city’s first teachers’ strike in 25 years. During strike, which lasted seven days, she led downtown marches by teachers in red shirts.

She then pressed her criticism of Emanuel when the mayor in 2013 moved to cut the schools budget by closing 50 schools – many of them in heavily African American communities.

ROUGH, EVEN FOR CHICAGO

Critics and political observers say Emanuel has had to make unpopular decisions while grappling with big financial problems, including an unfunded pension liability of $19.2 billion. The administration points to progress – the city’s projected 2015 $297 million operating fund deficit is the lowest in seven years.

“For three-and-a-half years, he has worked closely with people in every neighborhood of Chicago,” said Steve Mayberry, campaign spokesman.

Emanuel’s manner is tough even for Chicago, where bare-knuckles politics is the norm. His imperious style may have made unpopular decisions, such as school closings, even harder to swallow, said Alderman Roderick Sawyer, son of Chicago’s last black mayor, Eugene Sawyer.

If Lewis does decide to run, she would need to overcome her own vulnerabilities. She is seen by some as divisive. She has called Emanuel “a liar and a bully” and dubbed him “the murder mayor,” a reference to the city’s high crime rate.

Where Emanuel is famously disciplined as a campaigner and mayor, Lewis is freewheeling and has made occasional gaffes. She was videotaped mocking U.S. Education Secretary Arne Duncan’s lisp. She later phoned Duncan to apologize.

Emanuel already faces a small group of declared candidates. The best known is Alderman Bob Fioretti, who is white. The city election is non-partisan, and a runoff is held only if no candidate wins 50 percent plus 1 vote. Emanuel won in the first round in 2011.

Roosevelt University political science professor Paul Green predicts Emanuel will survive the first round, if he does not win outright. Lewis and Fioretti could face difficulties raising campaign funds, because donors to Chicago mayoral campaigns typically are wary of backing opponents of powerful incumbents.