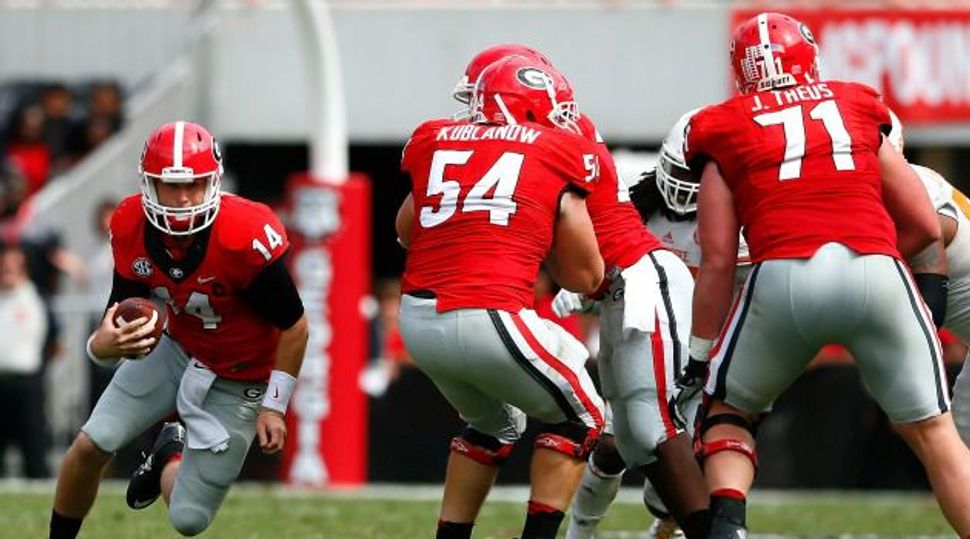 Blocking Guy: Brandon Kublanow, No. 54, is the sole Jewish starter on the University of Georgia football team. Image by getty images

An online petition protesting the university of Georgia’s decision to hold its homecoming football game on Yom Kippur has acquired some 2,000 signatures.

The petition decrying the scheduling conflict was addressed to the university president.

Georgia is playing Vanderbilt in a Southeastern Conference game on Saturday that is scheduled to start at 4 p.m, several hours before the end of Yom Kippur, the holiest day on the Jewish calendar.

The petition does not ask that the game be rescheduled but rather states, “We are simply here to ask how a major public university with a strong Jewish community could make this mistake.”

In a statement released to the local NBC affiliate, the university said that the conflict arose because the homecoming game is traditionally scheduled in October and the Oct. 4 game was the only home game on the schedule that month. It also noted that in an era of television contracts, universities like Georgia have little control over their schedules.

However, the university added, “we will in the future consider the option of scheduling Homecoming quite early or quite late during the football season, if necessary, to take appropriate regard for the deep respect we hold for our students’ religious tenets.”

Student Jamie Gottlieb, one of the petition organizers, told the television station, “We felt really acknowledged on campus and felt that our voice was heard.”

The Bulldogs have one Jewish player, Brandon Kublanow, a starter on the offensive line.

“My mom’s been talking to me about it,” Kublanow told the Augusta Chronicle recently. “Every year that it happens, it happened in high school, Yom Kippur would fall on the same day as a game and she’d be like, ‘You’re not playing.’ ‘Mom, come on. Let’s be realistic. I’m playing.’ ”

Kublanow, who growing up attended an Orthodox Chabad synagogue, according to the paper, said he would like to fast, per the day’s custom, but “realistically I’m not going to. I’ve got to be ready for the game. It is what it is.””