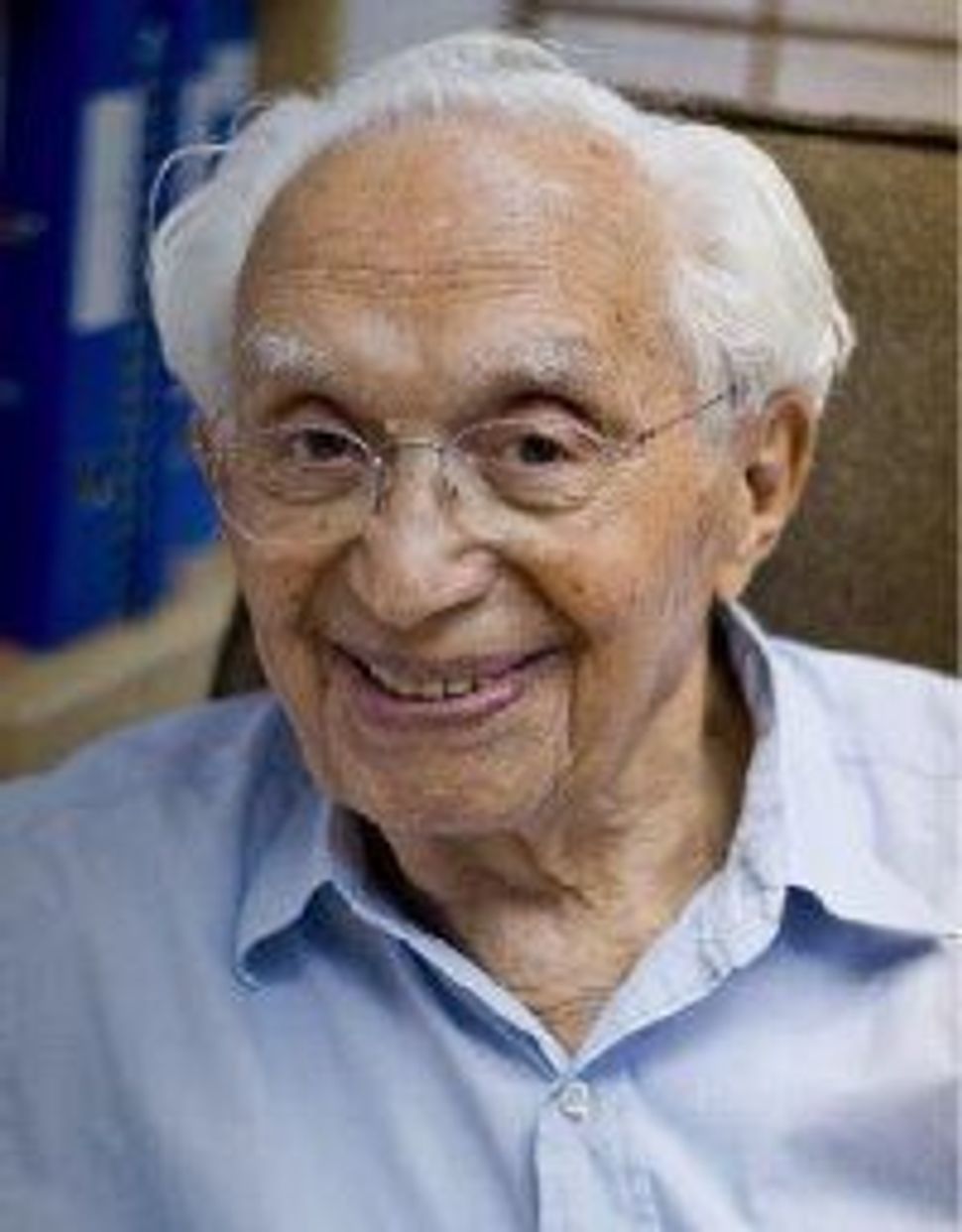 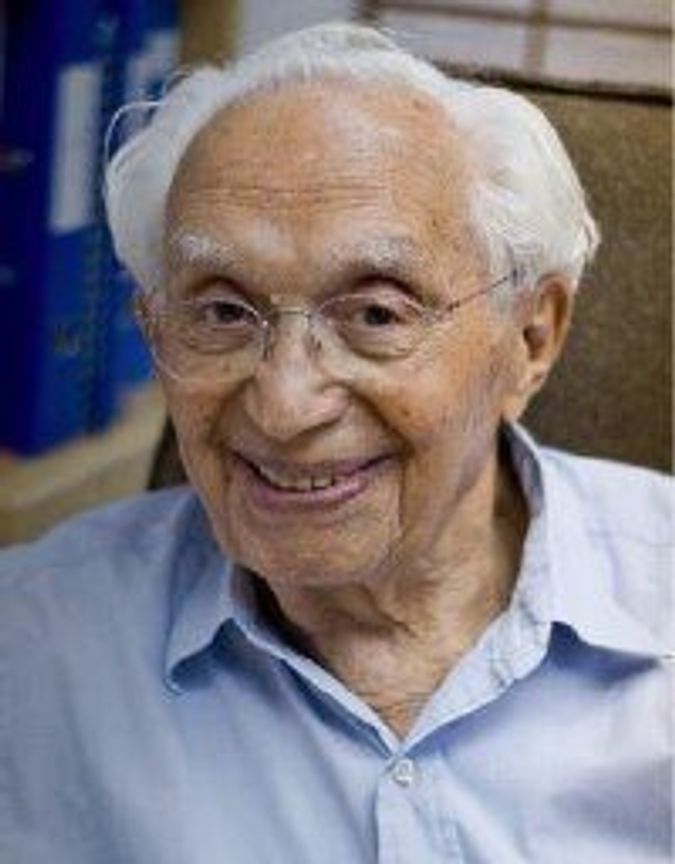 Goldman, who worked with the American Jewish Joint Distribution Committee since 1968 – he served twice as its chief executive and still held the title of honorary executive vice president – died Tuesday in Jerusalem, where he had lived for decades.

Active in arming and populating prestate Israel, he went on to lead the effort to bring American technical know-how and educational techniques to the fledgling state.

“Ralph was an iconic and transformative figure who embodied the notion that all ‘Jews are responsible for one another’ throughout his long and extraordinary life,” said JDC’s CEO, Alan Gill.

Born on Sept. 1, 1914, in the town of Lechovitz in what is now Ukraine, Goldman at 11 immigrated with his family to a Jewish suburb of Boston, where he attended the local public schools during the day and Hebrew school five days a week in the late afternoons. In 1934, graduating from Hebrew College, he delivered the valedictory speech in Hebrew.

As a young man, Goldman was involved in local Zionist endeavors. In 1937 he won a contest sponsored by a student Zionist organization for his essay on Stalin’s idea of creating a “homeland for the Jews” in Siberia. He was awarded a fellowship to spend a year in British Mandate Palestine, where he participated in the establishment of Kibbutz Hanita in the Galilee.

He later recalled two months during the 1938 fellowship spent in Jerusalem, where he and some friends sought out Zionist leaders such as Berl Katznelson, Moshe Sharett and Menachem Ussishkin – barely known in the outside world, but heroes to the young Zionists.

“We simply said to them please tell us what’s happening, and they took us seriously,” Goldman said in an undated interview posted on YouTube.

Goldman returned to the United States and went on to earn a bachelor’s degree from Boston University and a master’s in social work from Harvard.

He served in the U.S. Army from 1942 to 1945, first in the United States, then in England. At the conclusion of World War II, he was stationed in Germany, where he was assigned to assist Jews in Displaced Persons camps.

He was active in the New York operation of prestate Israel’s army, the Haganah, helping to buy and lease airplanes and ships to transport immigrants from Europe to Palestine, and assisting in the effort to recruit personnel for the nascent force. Through this work Goldman met and befriended Teddy Kollek, who would later become the longtime mayor of Jerusalem.

Decades later, Goldman still registered embarrassment when he was reminded of his purchase of the President Warfield, a one-time ferry. Named for the shipping magnate uncle of Wallis Simpson – the Baltimore socialite and notorious admirer of Hitler who had married King Edward VIII – the boat was flat bottomed, unsuitable for long sea voyages and barely made it across the Atlantic to Marseilles, where 5,000 Jewish refugees awaited passage to British Mandate Palestine.

His Haganah colleagues were furious with Goldman but, desperate to move, they prepared the boat for launch, with Goldman helping to manage the passage across the Mediterranean.

It was rechristened the Exodus, and its standoff outside Haifa became a symbol of Jewish resistance to Britain’s refusal to allow in Jews.

Goldman became a close confidant and adviser to Israel’s first prime minister, David Ben-Gurion, and in 1951 was in charge of the prime minister’s initial visit to the U.S. as head of state. He spent several years after that coordinating a U.S. program that delivered technical know-how to emerging countries; a 1951 announcement in New York said he was heading up the search for “skilled workers” to train Israelis.

He later served as executive director of the American-Israel Cultural Foundation and the Israel Education Fund, an arm of the United Jewish Appeal that helped establish and improve high schools in Israel.

Goldman joined the JDC in 1968 when he became the associate director of its Israel operation, establishing its department for the care of the elderly and introducing innovations in early childhood care. He would serve as the chief executive of JDC from 1976 until 1985, and again from 1986 until 1988.

Goldman was a driving force in JDC’s low-profile activities behind the Iron Curtain, and in the 1970s and 1980s brought JDC programs back into the open in communist countries. He led sensitive negotiations with Soviet leaders, navigating JDC’s return to what would become the former Soviet Union almost immediately after its collapse.

Asked in 2012 how he pulled off such negotiations without the benefit of diplomatic training or accreditation, Goldman said, “I was representing the Jewish People. I couldn’t afford to fail.”

Limmud FSU, together with the Jewish community of Belarus, last month celebrated his 100th birthday as part of the opening gala celebrations at the beginning of a Limmud FSU conference held in Vitebsk.

Goldman was honored at JDC’s centennial celebration in Jerusalem in May.

His son, David Ben-Rafael, a senior Israeli diplomat, was killed in the March 1992 bombing of the Israeli Embassy in Argentina.

Goldman is survived by his daughters, Judith Baumgold of Jerusalem and Naomi Goldman of New York; a daughter-in-law, Elisa Ben-Rafael of Jerusalem; and six grandchildren, as well as great-grandchildren.