Ex-Mayor Giuliani To Lead Protest Against ‘Death of Klinghoffer’ 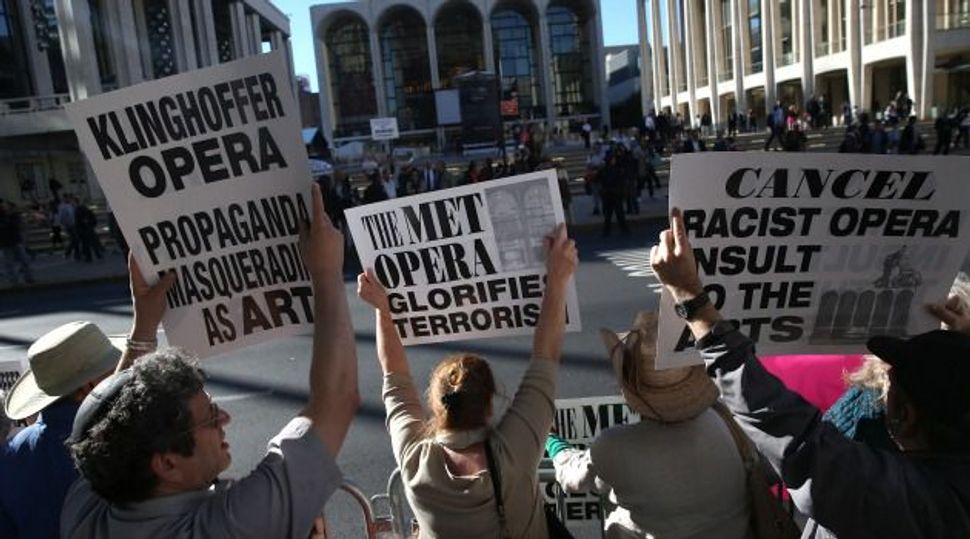 Protestors rally against ‘The Death of Klinghoffer’ opera in New York. Image by Getty Images

Former New York City Mayor Rudy Giuliani reportedly will lead a protest against the controversial opera “The Death of Klinghoffer.”

The opera, which tells the story of the 1985 hijacking of the Italian cruise ship Achille Lauro by Palestinian terrorists and the murder of Leon Klinghoffer, a 69-year-old Jewish-American passenger in a wheelchair, will premiere at the New York Metropolitan Opera House on Monday. The opera by John Adams debuted in 1991. Protesters charge that the production is anti-Semitic, hostile to Israel and sympathetic to terrorists.

The Anti-Defamation League has said that while the opera itself is not anti-Semitic, “there is a concern the opera could be used in foreign countries as a means to stir up anti-Israel sentiments or as a vehicle to promote anti-Semitism.”

Under heavy criticism, the Met decided in June to cancel a planned global simulcast for November of the opera. But it stuck to its decision to stage the show in New York.

Last month, thousands of demonstrators gathered outside the Met on its Opening Night Gala chanting “Shame on the Met!” and “Say no to the show!” in protest of the Met’s decision to produce the controversial opera.

Ex-Mayor Giuliani To Lead Protest Against ‘Death of Klinghoffer’