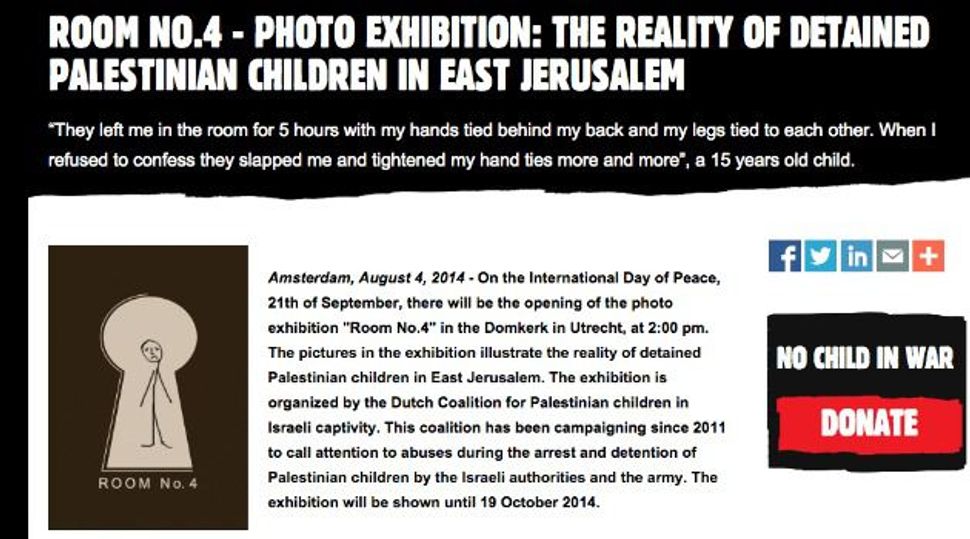 A group of Dutch Christians vowed to boycott Utrecht’s Domkerk Church for the duration of an exhibition on jailed Palestinian children, which they said encourages anti-Semitism.

The group made its decision known earlier this month in connection with the exhibition “Room No. 4,” which was brought to the Domkerk — one of the Netherlands’ best known churches and one of Utrecht’s tourist stops, by the Dutch Coalition for Palestinian Children in Israeli Detention.

The exhibition, which ended on Sunday, features pictures of adult models portraying Palestinian children who are suffering in Israeli detention facilities.

In one picture, the hairy hands of a hidden puppet master are gripping a marionette’s handle whose wires are connected to two people, one of whom is strung up like a crucifix. Another shows a woman emptying out her pockets to show she has no money amid 11 extended palms surrounding her. A third picture depicts seven arms hoisting up a man into a crucifer position and away from a book he is reading.

Among the people who said they would boycott the Domnkerk for the exhibition’s duration is Hebe Kohlbrugge, a writer and a member of the Domkerk Church.

“Many people cannot differentiate between Israel and Jews,” Kohlbrugge told the Trouw daily newspaper. “People wearing kippot are being harassed over Israel’s actions. Thus criticism of Israel becomes anti-Semitism.” Kohlbrugge also said that the church’s history of anti-Semitism makes it an unsuitable venue for criticizing Israel. “Before you point fingers, better look at the ones pointing in your direction,” he added.

Jaap Hamburger, whose group belongs to the coalition, wrote an Op-Ed on the news website joop.nl denying the exhibition encouraged anti-Semitism.

In the exposition, the church placed a board displaying members’ complaints against the exhibit, but said it decided to host it anyway because of its “commitment to children’s rights.”

The Liberal Jewish Community of Utrecht also condemned the hosting of the exhibition at the church.