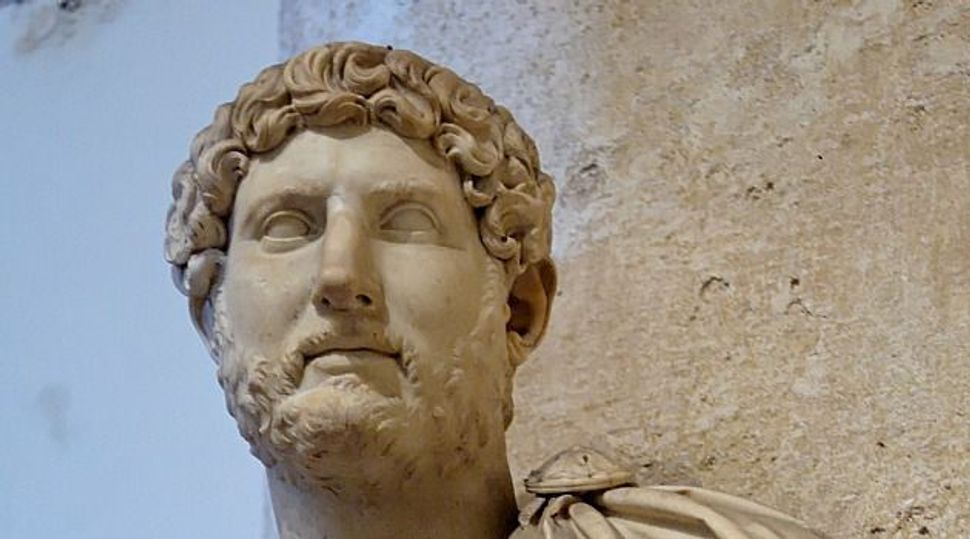 A fragment of a stone engraved with an inscription dedicated to the Roman emperor Hadrian was discovered in Jerusalem.

The existence of the 2,000-year-old stone fragment, discovered in recent months during salvage excavations north of the Damascus Gate by the Israel Antiquities Authority, was announced Tuesday.

The stone inscription was found around the opening of a deep cistern, likely recycled from its original location to be used to build the cistern. The bottom of the inscription, recycled as building material, was sawed around in order to allow the waterhole’s capstone to fit.

The inscriptions, consisting of six lines of Latin text engraved on hard limestone, was read and translated by Avner Ecker and Hannah Cotton of the Hebrew University of Jerusalem. The English translation of the inscription is: “To the Imperator Caesar Traianus Hadrianus Augustus, son of the deified Traianus Parthicus, grandson of the deified Nerva, high priest, invested with tribunician power for the 14th time, consul for the third time, father of the country (dedicated by) the 10th legion Fretensis (2nd hand) Antoniniana.

This inscription was dedicated by Legio X Fretensis to the emperor Hadrian in the year 129/130 CE, according to Ecker and Cotton. Their analysis shows that the fragment of the inscription revealed by the archaeologists is the right half of a complete inscription, the other part of which was discovered nearby in the late nineteenth century. That stone is currently on display in the courtyard of the Studium Biblicum Franciscanum Museum.

Only a small number of ancient official Latin inscriptions have been discovered in archaeological excavations throughout the country and in Jerusalem in particular, according to the Israel Antiquities Authority, or IAA.

The significance of the inscription stems from the fact that it specifically mentions the name and titles of Hadrian who was an extremely prominent emperor, as well as a clear date, according to the IAA.

The 10th legion Fretensis, garrisoned in Jerusalem, dedicated the monument to Hadrian at the city’s entrance before his visit. Two years after Hadrian’s visit came the Bar Kochba revolt, the Jewish insurrection against Rome.

“There is no doubt that the discovery of this inscription will contribute greatly to the long-standing question about the reasons that led to the outbreak of the Bar Kochba revolt,” according to Dr. Rina Avner, excavation director on behalf of the Israel Antiquities Authority.