Poland Wants To Reclaim Forgotten Past as Haven for Jews 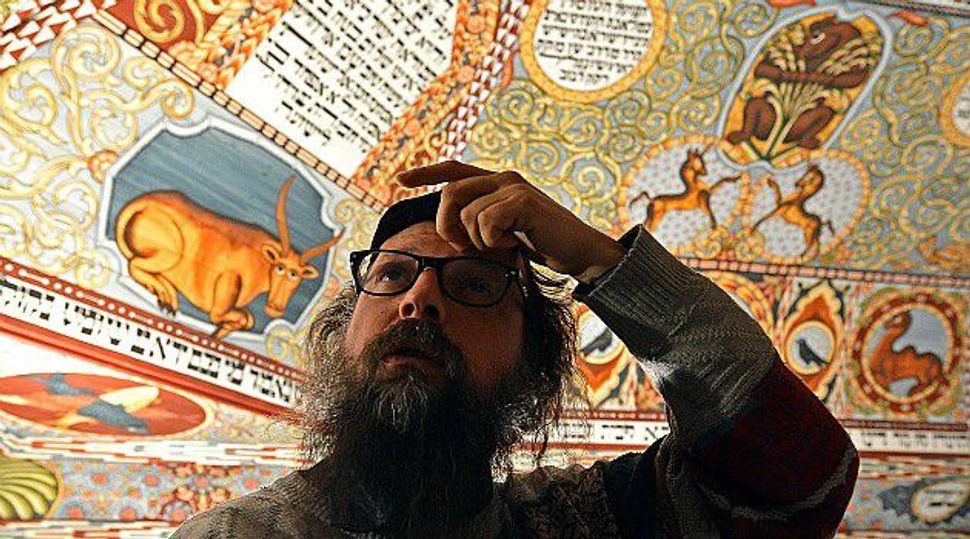 Intricate Recreation: Boaz Pash, chief rabbi of Krakow, explains the symbols on the reconstructed roof of a 18th century wooden synagogue that once stood in the town of Gwozdziec. The meticulous model is a centerpiece of the new Jewish museum in Warsaw. Image by Getty Images

Poland, the country on whose soil Nazi Germany carried out the darkest acts of the Holocaust, is starting to re-connect with its other role in Jewish history, as a home for 1,000 years to one of the world’s biggest Jewish communities.

The country will take a step in that direction next week with the opening of the main exhibition at Warsaw’s newly built Museum of the History of Polish Jews, a project that sets out to remember not just how Jews in Poland died, but how they lived.

Poland’s effort to reach out to its Jewish heritage, tentative and incomplete though it is, contrasts with the mood in other parts of Europe, where Jewish groups say Jews are subject to hostility and sometimes violent attacks.

Some in the Jewish community say Poland – site during the German occupation of the Warsaw ghetto and the Auschwitz, Treblinka and Sobibor camps where millions of Jews were killed – is now more welcoming than many western European countries.

“When you take into account that Jews are being beaten up in the streets in Germany or France or Scandinavia, you even have synagogues being burned down, murders – we don’t have any of that,” said Piotr Kadlcik, vice-president of the Jewish community of Warsaw, one of the country’s biggest Jewish groups.

“I think that right now it’s safer to walk around Warsaw in a yarmulke than it is in certain neighborhoods in Paris.”

On May 24, a man with a Kalashnikov rifle walked into a Jewish museum in Brussels and killed three people, while in July people protesting against Israel’s military operation in Gaza clashed with riot police outside two Paris synagogues.

Incidents like that have created a climate of fear among Europe’s Jews, even though some data from Jewish groups point to a decline last year in the number of anti-Semitic acts recorded in Britain and France.

If Poland is, relatively, a haven for Jews, it may be because there are too few of them – 7,508 according to the 2011 census – to make them a big target, or because Poland has no sizeable Muslim community. In other countries, the perpetrators of some high-profile attacks on Jewish targets were Muslim.

It could also be that because the Holocaust has left such a deep stain on the way Poland is perceived, any steps to embrace the Jewish past, however small, feel like important progress.

On Tuesday, the presidents of Israel and Poland will lead the dignitaries at a ceremony to open the main exhibition at the Museum of the History of Polish Jews, in a glass-sided building on the site of what was Warsaw’s Jewish ghetto.

Barbara Kirshenblatt-Gimblett, Program Director of the Core Exhibition, said she hopes the museum will reach the Poles who, because of the Holocaust and persecution of Jews under Communist rule, have suppressed their Jewish identity. They are estimated to number in the tens of thousands.

“One of the things which we were looking to do is for this museum to be transformative, to support the renewal of Jewish life, by showing those in Poland today who hid their Jewish roots that there is nothing to fear and nothing to be ashamed of,” Kirshenblatt-Gimblett said.

Kirshenblatt-Gimblett’s father grew up in Opatow, a town in south-eastern Poland. He emigrated to Canada before the war. In 1942, the Nazis deported the town’s Jewish population to the death camp at Treblinka.

Kirshenblatt-Gimblett, for many years a professor at New York University, accompanied her father on his first trip back to his hometown in 1988.

Initially, she said, her father was a reluctant visitor, and local people kept their distance. But after a decade of visits, the townspeople started to embrace her father, and the Jewish history that he represented.

After one visit came a breakthrough: the town decided to commemorate the date of the 1942 deportations.

That experience, said Kirshenblatt-Gimblett, was a template for the role she hopes the museum will play in reviving memories.

The museum building was financed by the Polish state while the exhibition was funded by donors in Poland and abroad.

Exploring the history of Jews in Poland involves confronting uncomfortable truths. While Nazi occupiers carried out the Holocaust, at several points in their 1,000-year history in Poland, Jews were persecuted by their Polish neighbors.

The exhibition, a sequence of eight connecting galleries that use sound, atmospheric lighting and eyewitness testimony to evoke moments in Jewish history, deals with Poland’s own treatment of Jews by showing visitors the good and the bad, and letting them make up their own minds.

The section that deals with the war describes how some Poles made a living extorting money from Jews who were in hiding by threatening to expose them. It also describes how Catholic nuns risked their lives hiding Jewish children at a Warsaw orphanage.

The prejudice is not all in the past. A far-right movement on the fringes of Polish political life today is called Mlodziez Wszechpolska. That is the same name as an anti-Semitic group that beat up Jewish students in Poland before World War Two.

This year, at a Warsaw recreation ground where children were playing, one Polish father complimented an acquaintance on how his son had grown taller. “He’s shot up like a Jew’s commission,” the first father said. The comment, he said, was a figure of speech, not anti-Semitism.

Tad Taube, a U.S. entrepreneur who was born in Krakow, Poland, and as a young boy emigrated just before the Nazi invasion, is one of the principal donors to the museum.

He said it would be unrealistic to think anti-Semitism was not present in Poland, but it was gratifying that it was not as bad as in western Europe.

“I often expected some kind of an incident or something to happen. Never happened. Never saw him approached in a negative manner or a threatening manner. So I think the Poles have sort of gone beyond that period of their history at this point.”

Poland Wants To Reclaim Forgotten Past as Haven for Jews