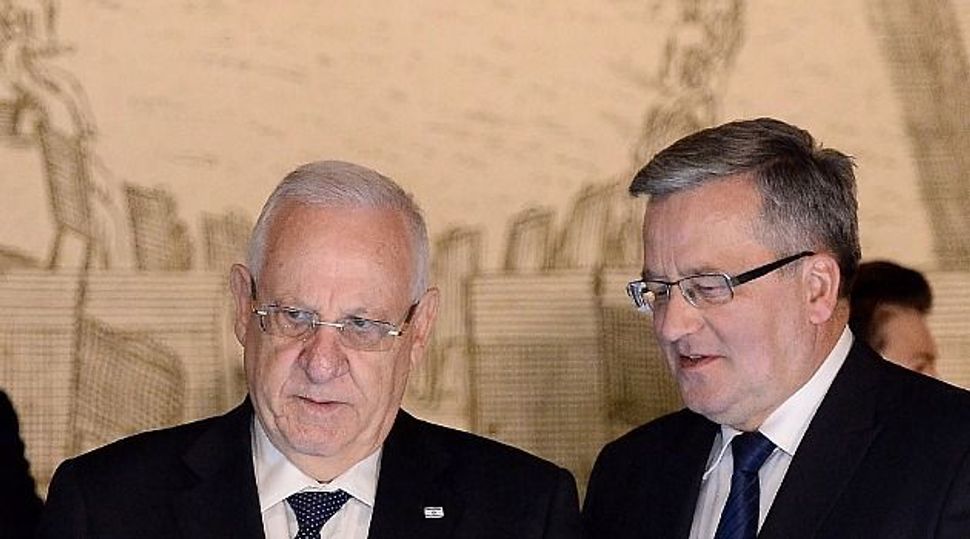 The presidents of Israel and Poland together took a guided tour of a new museum of Jewish life on Tuesday that tells the story of how Poland was for centuries home to a flourishing Jewish community before becoming a graveyard for Jews in World War Two.

Polish President Bronislaw Komorowski, his Israeli counterpart Reuven Rivlin, and their wives, walked side by side through the Museum of the History of Polish Jews, where the main exhibition opened on Tuesday.

Poland is associated with Auschwitz, Treblinka and other death camps on its soil where Nazi Germany exterminated millions of Jews. But it had also been home for 1,000 years to one of the world’s largest Jewish communities.

“…For centuries this multi-confessional, multi-national republic was for them a safe place and, generally a friendly place, a beautiful exception on the map of Europe,” Komorowski said in a speech at the opening.

The museum, on the site of the Warsaw ghetto, charts that history by displaying Jewish life in Poland over the centuries, from times of peace to the pogroms they suffered.

“Only these parallel tales of heroism and pettiness, of sacrifice and crime, of life and death, can bring us together again,” said Komorowski.

The museum building, a modernist glass cube, was paid for by the Polish state while the main exhibition is financed through donations, many from Jewish entrepreneurs who emigrated from Poland to the United States.

The mass murder of Jews was perpetrated in occupied Poland by Nazi Germany. But there were instances of Poles betraying Jews who were in hiding to the Nazis, and of Polish people killing Jews.

In one of the deadliest examples, residents of the Polish town of Jedwabne herded its Jewish community into a barn and set fire to it. There were also cases of Poles saving Jews from the Nazis by hiding them or facilitating their escape.

The Israeli president said the opening of the museum showed Poland was changing.