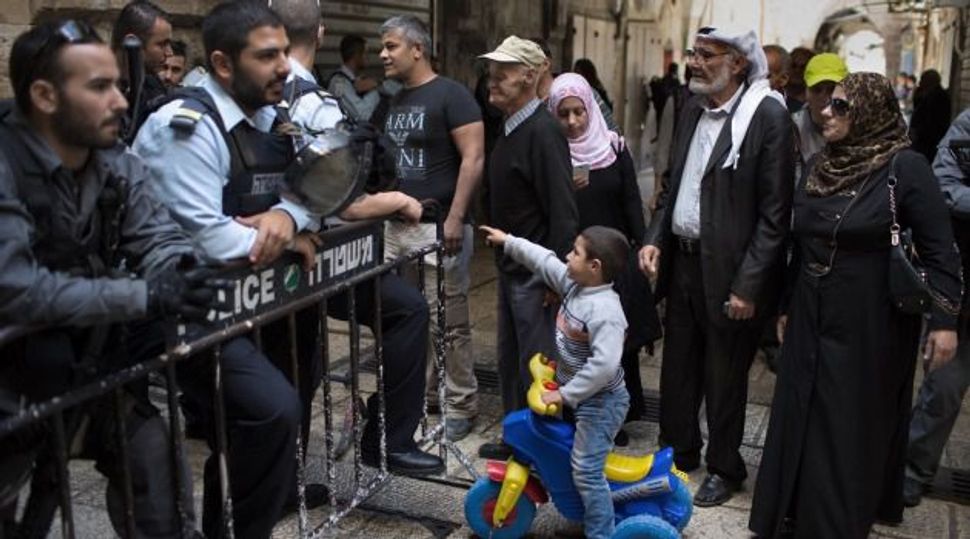 Muslim worshippers over the age of 50 returned to pray at Al Aqsa mosque in Jerusalem’s Old City on Friday, a day after Israeli authorities shut down all access to the sacred compound following violence in East Jerusalem.

The Muslim quarter of the Old City was calm early in the day, the Muslim holy day, and police said pre-dawn prayers had passed off without incident. However, security was tight ahead of midday prayers, when more people were expected to attend.

Israeli border police increased their presence in the cobblestone alleyways of the Old City and around the Muslim access points or gates into the Al Aqsa compound, checking identification papers closely.

Palestinian President Mahmoud Abbas described the closure of Al Aqsa as “tantamount to a declaration of war” by Israel.

His Fatah party and Hamas had called for a “day of rage” in Jerusalem to protest at the closure of the holy site that was partially reopened late on Thursday. Rainfall in Jerusalem, the first in weeks, looked likely to dampen any protests.

Locals said it was the first time Al Aqsa had been closed to all visitors – Muslims, Jews and tourists – since 2000, when the second Intifada or Palestinian uprising began. But Jordanian religious authorities said it was first full closure since 1967.

Israel police frequently limit access to Al Aqsa to women and Muslim men over the age of 40 or 50 when they are concerned about potential clashes at the site. It was not clear when the compound would be reopened to all Muslim worshippers.

“I normally go five times a day to pray, but the police are not letting me today,” said Ahmed Abu Zaaror, 21, who runs a fruitstand in the Muslim quarter of the Old City. Asked if he was angry at the situation he said:

“What can I say? I have to keep all my anger inside.”

Tensions have been high on the streets of East Jerusalem and around the Al Aqsa compound for weeks, following the Gaza war and Israel’s moves to expand settlement building in eastern areas of the city, which the Palestinians want for a capital of an independent state alongside Gaza and the West Bank.

Al Aqsa, which Jews refer to as Temple Mount, is a particularly sensitive issue. The 38-acre (15 hectares) compound houses the 7th century Dome of the Rock and the Al Aqsa mosque, from where Mohammad is said to have ascended into heaven. It is the third holiest place in Islam.

It was also home to two ancient Jewish temples, the second one destroyed by the Romans in 70 AD, and is the holiest place in Judaism.

Under the rules governing access to Al Aqsa, which is administered by Jordanian religious authorities, Jews are allowed into the compound but are not permitted to pray.

In recent years, there has been a push by far-right Jewish activists to be allowed to pray at the site, a campaign that has heightened tensions with the Muslim community.

The leader of that campaign, an American-born activist called Yehuda Glick, was shot and seriously wounded this week by a suspected Palestinian gunman.

Israeli police tracked the shooting suspect down to the Palestinian neighborhood of Abu Tor, in the shadow of the Old City, on Thursday morning and, after an exchange of gunfire, shot him dead, leading to fierce clashes on the streets of the district and fears among locals of another Palestinian uprising.