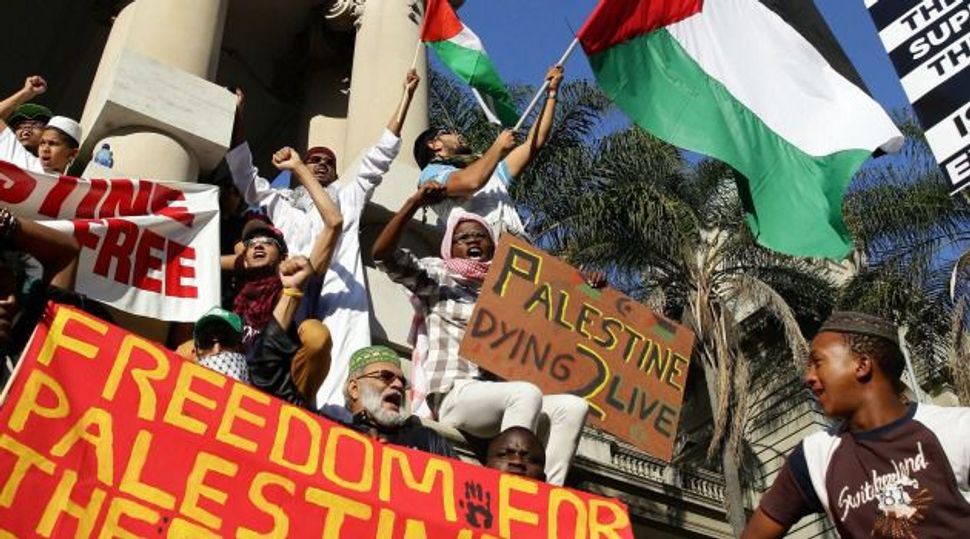 Jewish protesters demonstrated outside a South African chain store to condemn anti-Israel protests that they say have turned anti-Semitic.

The South African Jewish Board of Deputies umbrella body staged the demonstration Thursday outside the Sea Point store, part of the upscale national chain Woolworths, against the Congress of South African Students’ Western Cape branch.

The rally was in response to a pig’s head being placed in what was thought to be the store’s kosher refrigerators the previous week by COSAS.

COSAS said its action was in protest of the store continuing to stock Israeli goods in the wake of the Israel-Gaza conflict this summer.

The board’s national director, Wendy Kahn, told protesters that there had been an escalation in levels of anti-Semitism and hate speech against Jewish South Africans in the past few months, including verbal and physical threats of violence, “culminating in the ultimate anti-Semitic emblem.”

She said the incident “with a pig’s head being smuggled inside a baby’s pram and placed in a freezer that was assumed to contain kosher meat shows a vicious and vulgar hatred. Every South African citizen who cherishes our democracy should be horrified by this.”

The board has lodged a complaint against COSAS and its Western Cape provincial chairman, Siphakamise Ngxowa, with the South African Human Rights Commission. But Ngxowa said the group was fighting for human rights.

“How can they speak about the issue of the pig when children are being killed in Palestine?” he asked.

Paula Disberry, Woolworths’ group director of retail operations, said the company was “appalled” by the students’ action, which she described as “unacceptable and offensive.”

Meanwhile, News24.com reported that the African National Congress, the country’s ruling party, has “expressed concern” at COSAS’ action, with its deputy secretary-general, Jessie Duarte, describing it as “misguided and extremely unfortunate.” Duarte called on COSAS to “desist from further engaging in such acts.”

“Our calls for solidarity with the people of Palestine and for heightened action to boycott and isolate Israel is not a call or a campaign against Judaism, nor is it anti-Semitic,” she said.