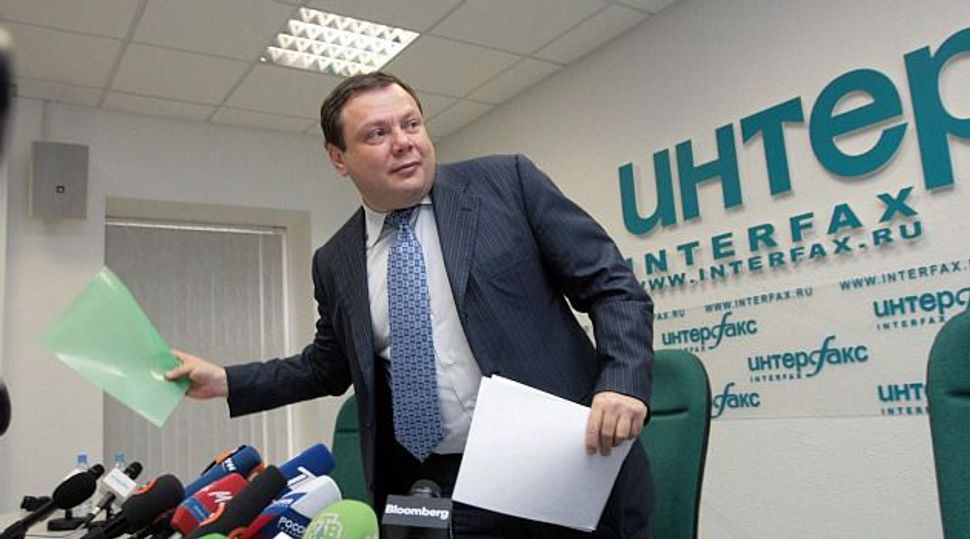 Is He? Oil mogul MIkhail Fridman is among those listed on a controversial new list of top Russian billionaires who are Jewish. Image by getty images

A member of Russia’s Human Rights Council condemned a news website that said that nearly a quarter of Russia’s top billionaires are Jews.

Nikolai Svanidze of the council – a Kremlin-affiliated body with no executive powers –- made the condemnation last week against Lenta.ru, which analyzed according to faith and ethnicity the Forbes Magazine list for 2014 of people Forbes identified as Russia’s wealthiest.

The Lenta.ru study claimed that 48 of the 200 richest Russians were Jews, who own a total capital of $122.3 billion. Ukrainians also owned an outsized share of Russia’s private capital, the publication claimed.

“It’s a Nazi and racist approach,” Svandiza was quoted as saying by the Slon.ru news site.

But Yuri Kanner, president of the Russian Jewish Congress, defended the decision to publish the study.

“If you cannot compare the proportion of representatives of various nationalities in the general ethnic composition of the country, it is impossible to understand who is really successful and who is not,” he told the currsorinfo.co.il news website on Oct. 29.

He said, however, that he doubted the authenticity of the research.

“The proportion of Jews in the population of the Russian Federation is calculated incorrectly. Besides, to compare the Jewish population, which is mainly concentrated in the major cities and has a university degree, with a total mass of Russian citizens, it is not accurate,” Kanner said.

Among the people listed in the Lenta study as Jewish were Mikhail Fridman ($17.6 billion); Viktor Vekselberg ($17.2 billion) and Leonid Michelson.

They did not identify themselves to Lenta as Jewish, the news website said.