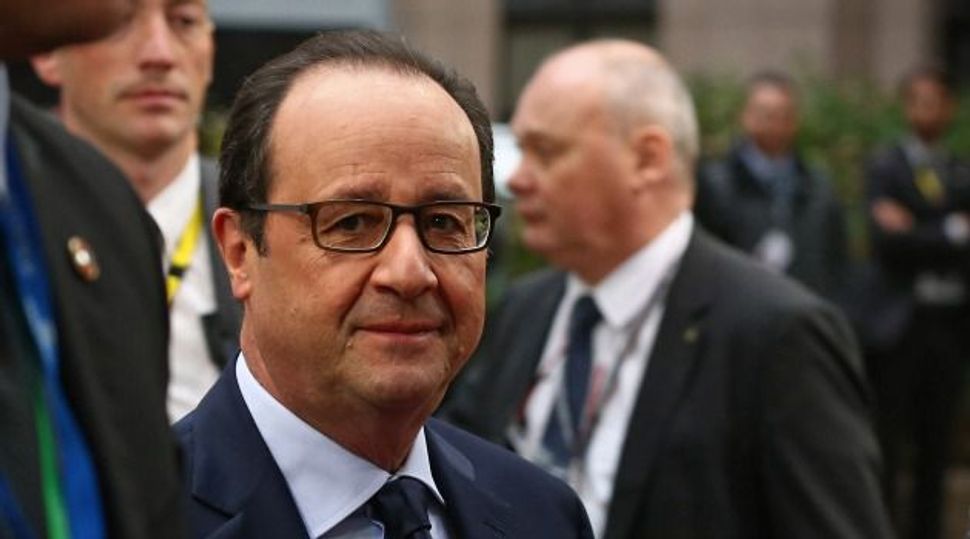 Spreading Strategy: The party of French premier Francois Hollande plans to push a vote to recognize a state of Palestine, the latest such move by allies in Europe. Image by getty images

France’s ruling Socialist party wants parliament to recognize a Palestinian state, parliamentary sources said, following similar moves by Sweden and Britain that are meant to overcome an impasse in peacemaking but which have angered Israel.

Palestinians seek statehood in the Israeli-occupied West Bank and blockaded Gaza Strip with East Jerusalem as their capital – lands captured by Israel in a 1967 war, although Israeli soldiers and settlers withdrew from Gaza in 2005.

The latest round of fitful efforts to forge a two-state solution collapsed in April. Palestinians now see little choice but to push unilaterally for statehood and have encouraged international steps to recognize it.

“The (Palestinian) situation is so blocked that most Socialist lawmakers now believe that we must do something and that the existing positions must be shifted,” a French parliamentary source said on Wednesday. “This is a way of doing that.”

A draft text prepared for debate within the Socialist bloc in parliament and seen by Reuters calls on the French government to “use the recognition of a Palestinian state as an instrument to achieve a definitive solution to the conflict.”

France does not classify Palestine as a state, but says it could extend recognition if it believed doing so would help promote peace between the Palestinians and Israel.

Foreign Minister Laurent Fabius, who was to meet Socialist MPs later on Wednesday to discuss the issue, said on Oct. 14 Paris should recognize a Palestinian state only if this would help achieve peace, not as a symbolic gesture.

The parliamentary source said the Socialist party hoped to agree on a final text in the coming days and weeks.

Once approved, it can then be submitted to the president of the lower house of the National Assembly, who decides whether to put it forward for debate among all members of parliament.

“There are still several steps still to go, but the Socialist bloc believes there has to be a parliamentary initiative on this,” the parliamentary source said.

The Swedish government officially recognized the state of Palestine on Oct. 30, following a non-binding British parliament vote to do so. With similar votes in the pipeline in Spain, France and Ireland, Palestinians hope diplomatic momentum in Europe is shifting in their favor.

Israel recalled its ambassador to Sweden for consultations and said the recognition moves were counterproductive to prospects for future negotiations.

Swedish officials said Stockholm’s recognition aimed to support moderate Palestinians and make their status more equal with that of Israel in peace diplomacy.